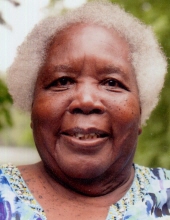 Agatha Lee Cash, of Wadesboro, NC, died peacefully in her sleep Friday morning, March 12, following a short bout with kidney failure. Born March 22, 1933, Gatha passed just 10 days short of her 88th birthday. Gatha was born and raised in Wadesboro, NC, where she was part of a large and wonderful farming family. She was the second youngest of 11 children. At the age of 17, she moved to Connecticut to begin in-home family care, a job choice that would prove a lifelong passion. She spent 19 years with the Smolowe family in Westport, CT, leaving only after the youngest child, Ann, went away to college. The four Smolowe children always regarded their beloved “Aggie Baby” as their third parent and remained intimately involved in her life after she left their home. Gatha was cradling Ann in her arms when Ann drew her final breath in 2010. Jonathan, 64, the third of the four, was by Gatha’s side when she died. Gatha next spent two years with the family of Academy Award-winning actor Jason Robards, in Southport, CT, traveling around the world with him, his wife and their two young children. While she loved the family deeply, she wasn’t fond of the travel. Settling in Norwalk, CT, she went to work for a manufacturing company. But after a few years, she found that she missed caring for families too much. Her next stop was the Freeman family in Trumbull, CT, where she cared for Daniel, a beautiful and energetic autistic baby. She stayed with the Freemans for 20 years before retiring and returning to Wadesboro. During those two decades, says Danny’s mother, Marge, “Gatha was my confidant, my counselor.  Sometimes like a mother, sometimes like a sister, she encouraged and inspired me, chastised me, calmed me down and spurred me on.  She was a fierce supporter and advocate for Daniel from the time he was 3 months old until a week before her death, when he was 33. “ Danny reciprocated Gatha’s love, following her directions far more than anyone else’s, and turning to her when he felt powerless.  As his third parent, Gatha believed that given love, guidance and opportunity, Danny would be able to gain the life skills necessary to care for himself. She fiercely advocated for every intervention that she felt would help him mature and pushed back hard against anyone or anything that she thought would sideline him.  She continually told him and others that he was very smart, and she was right. Danny, who holds a job and lives semi-independently, has proven to be an inventive problem solver and empathetic young man.   Gatha was predeceased by her parents, Robert and Glennie Cash; her brothers Clyde, Bradley, Wilson and Eddie Cash; her sisters Ceilie Cash, Sally Cole, Lottie Rollins, Hurley Campbell, Julia Smith, Betty Cash and Ida F. Pratt; and her chosen daughter, Ann Smolowe. She is survived by her sister Patricia Gaddy, her brother Robert T. Cash, and a host of nieces, nephews, friends and family, both blood-related and chosen. The funeral will be at graveside only, per Ms. Cash’s wishes. It will take place at 10:00 a.m. on Sunday morning, March 14, at the cemetery across the street from Sandy Ridge Church at 2111 Sandy Ridge Church Road, Morven, NC. In lieu of flowers, the family requests that donations be made in Gatha’s name to the organization that provided her with amazing hospice care in her final days. Checks can be made out to: Community Home Care & Hospice, 1791 E. Broad Avenue, Rockingham, NC 28379. Alternately, the organization can be reached at 910-895-2871. The service will be shared via Facebook live on Leavitt Funeral Home's Facebook page. The arrangements are in care of Leavitt Funeral Home and online condolences may be made at www.leavittfh.com
To order memorial trees or send flowers to the family in memory of Agatha Lee Cash, please visit our flower store.