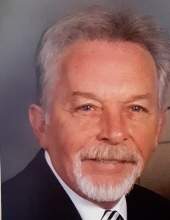 In the early morning hours of February 26, 2021, following a brief illness, Ab Carter quietly drew his last breath on Earth and immediately drew his first fresh breath of Heaven. Born to Albert Lee Carter, Sr and Alice Brower Carter on February 11,1949, “Little Ab” was the second of four children and the only son. He grew up in Wadesboro, NC hunting, fishing, playing baseball, taking piano lessons (at least until his first recital and then announced, “I’m done!”), was a member of the Boy Scouts and somewhere in there, managed to go to school and graduated from Wadesboro High School in 1967 where he was a proud member of “The Marching 100”. Shortly thereafter, he joined the US Navy and was stationed for most of his four years of service in Pearl Harbor, Hawaii aboard the nuclear submarine “USS Bonefish”. After discharge from the Navy, he attended Anson Tech for a degree in Business. Ab was a lifetime member of First Baptist Church in Wadesboro, NC. His knowledge of lumber combined with his gift of “gab” led him to a long career in sales and he retired from US Lumber after more than 30 years of service. His wicked sense of humor and love of laughter made him quite the entertainer. Ab loved college football and we all knew not to call him on Saturdays at whatever time his team, the Clemson Tigers, were playing. His passion was family and his joy was seeing others succeed. He was a loving son, husband, father, “brutha”, protector, mentor, friend and encourager and has left a void that only Heaven will someday fill. Left to grieve the loss and cherish the memories are his wife of 37 years, Karen Hildreth Carter, sons Jarrett Brower Carter and Truston Lee Carter all of Easley, SC, his sisters, Ellen Carter Styers (David) of Kannapolis, NC and Lydia Robin Carter Yancey of Concord, NC, his protector and constant companion, “Skidmore” - and his brothers by choice, Frankie Cranford and Billy Edwards of Wadesboro, NC, Richard Steele of Easley, SC and James Hunt of Lexington, NC. He is also survived by his nieces and nephews, cousins and many, many friends. He was predeceased by his parents, his son Matthew Albert Carter, his sister Eugenia Carter Watson and his beloved Aunt Louise Gardner. Also preceding him in death was his brother by choice, Paul Mitchell of Greer, SC. A memorial service will be held at 1:00 on Saturday, April 24, 2021 at Leavitt Funeral Home 2036 Morven Rd. Wadesboro, NC with burial in Anson Memorial Park. Memorial donations may be made to Pruitt Health and Hospice 301 Halton Rd. Unit B Greenville, SC 29607 or a charity of one’s choice.
To order memorial trees or send flowers to the family in memory of Albert "Little Ab" Lee Carter, Jr., please visit our flower store.