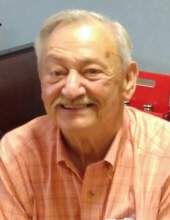 Wadesboro - Mr. Allen Floyd, 76, died Friday, April 23, 2021 at Atrium Health Anson in Wadesboro. Services will be 2:00pm Monday, April 26, 2021 in the Chapel of Leavitt Funeral Home. Interment will follow in Anson Memorial Park. Allen was born October 6, 1946 in Richmond County, NC and was a son of the late Benjamin Franklin "Benny" Floyd and the late Eva Stephens Floyd. He was a graduate of Ellerbe High School and was a veteran of the United States Army. He was a truck driver and had worked with Morven Freight Lines and Yellow Freight retiring with more than 30 years of service. Those left to cherish his memory are his wife of 45 years, Fran Tyson Floyd; his daughter, Robin Floyd Collins of Rockingham; his grandchildren, Kenneth Allen Sasser (Rebecca) of Hamlet and Heather Nicole Chappell of Rockingham; his grandchildren, Kaylee and Melody; his brothers and sister, Edward Floyd (Stella) and Dennis Floyd both of Ellerbe, Helen Parker (James) of Nashville, AR and Steve Floyd of Siler City and extended family on both the Floyd and Tyson sides of their family. He also will be missed by his breakfast buddies, Bo Treadaway, Harry Williamson, Don Thompson, Bobby Hildreth, Ronnie Williams and Rodney Ray. In addition to his parents, he was preceded in death by his brothers and sisters, J.T. Floyd, Elizabeth Smith, Charles Floyd, Sue Ashworth, Joyce Daniels, Robert Floyd and Ray Floyd. In lieu of flowers, memorials may be made to the charity of the donor's choice.
To order memorial trees or send flowers to the family in memory of Allen Floyd, please visit our flower store.