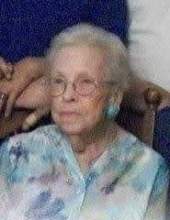 LILESVILLE - Allie Mae Poplin McCormick 99, of Southport NC and formerly of Lilesville, went to be with her Lord and Savior Jesus Christ on Monday, February 1, 2021. Allie was born September 20, 1921 in Anson County, NC and was a daughter of the late James Thomas Poplin and the late Betty Elizabeth Liles Poplin, she grew up in Lilesville. She married her High School sweetheart, Calvin Nevil “Dooger” McCormick and had 6 children together. She was a housewife most of her life. In 1969, Allie & Calvin bought The Pee Dee Bait & Tackle Shop on the Pee Dee river in Anson County. Together, they ran a family-owned business for 12 years until Calvin’s death in 1985. Allie moved to Oak Island NC and lived there for 20 years. She came back to Southport living with her daughter Phyllis Litke in 2016 who was her care giver until moving into Liberty Commons Nursing and Rehabilitation Center in 2019 until her death. Those left to cherish her memory are her children, Jimmy McCormick wife Bonnie of Lilesville NC, Carolyn Morris husband H.C. of Cheraw SC, Billy McCormick wife Brenda of Lilesville, Phyllis Litke husband Rudy of Southport NC, Joey McCormick wife Janet of Peachland NC, and Patty McCormick and Tommy Tadlock of Boiling Springs Lakes NC: 17 grandchildren; 28 great-grandchildren and 4 great-great-grandchildren. In addition to her parents and her husband, she was preceded in death by a granddaughter, Susan Morris, her great-grandson, Noah Clarke and her brothers and sisters, James Everette Poplin, Claude Thomas Poplin, her twin Allan Maynard Poplin, Ruth Hadden, Sue Coniglaro and Blanche Jennings. She enjoyed cooking her children’s favorite dishes when they visited. She enjoyed their company too. Her hobbies were gardening, crafting, word puzzles, watching birds and reading Nicholas Sparks novels. Funeral services will be 2:00pm Sunday, February 7, 2021 in the Chapel of Leavitt Funeral Home in Wadesboro with Rev. Randy Swaringen and Rev. Tom Walden officiating. Interment will follow in Anson Memorial Park. Family and friends may pay their respects on Saturday February 6, 2021 at the funeral home from 1:00pm until 6:00pm The family would like to thank all who participated in the arrangements, and especially to Liberty Commons Nursing Rehabilitation Center of Southport. The awesome nurses and aides that took care of Allie (Allie Cat) as they called her for 1 year and 4 months. They are all heroes! In lieu of flowers, memorials may be made to Cathedral Baptist Church , 1215 Old Lilesville Rd., Wadesboro, NC 28170 or to Gum Springs Baptist Church, c/o, Sarah Harrington, 1364 Haileys Ferry Rd., Lilesville, NC 28091. The arrangements are in care of Leavitt Funeral Home and online condolences may be made at www.leavittfh.com
To order memorial trees or send flowers to the family in memory of Allie Mae Poplin McCormick, please visit our flower store.