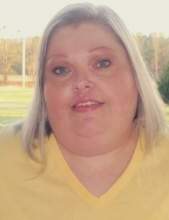 LILESVILLE Mrs. Audrey Oxendine Lawhon, 48, died Thursday, November 22, 2018 at Carolinas Healthcare System Anson in Wadesboro. There will be a memorial service at 2:00pm Wednesday, November 28,2018 in the Chapel of Leavitt Funeral Home with Rev. Donnie Helms officiating. The family will greet friends one hour prior to the service Wednesday at the funeral home and other times at the home. There will be a private inurnment in Morven Cemetery. Audrey was born November 27, 1969 in Chesterfield County, SC and was a daughter of the late Frances Dawkins Benton and the late Marvin Rudolph Oxendine. Surviving are her husband of nearly 22 years, Michael Edward Lawhon; her daughter, Laura Ann Lawhon both of the home; her step-son, Michael Edward Lawhon, Jr. of Hoffman; her sisters and brother, Jill Trammell (Bill), Donnie Benton (Verdia), Joanie Jones (Kenny), Glenda Lisk (fiance Kenny Brower) all of Wadesboro, Janet McCormick (Joey) of Peachland Deborah Gathings and Sharon Morton (Rodney) both of Lilesville and his niece and nephews and their families. In addition to her parents, she was preceded in death by her sister, Kathy Benton. In lieu of flowers, memorials may be made to the charity of the donors choice. The arrangements are in care of Leavitt Funeral Home. Online condolences may be made at www.leavittfh.com
To order memorial trees or send flowers to the family in memory of Audrey Oxendine Lawhon, please visit our flower store.