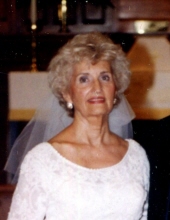 WADESBORO Mrs. Barbara Jarman Wolfe "Bobbie", 87, passed away peacefully on Saturday, December 28, 2019 at Brookdale Square in Monroe. Funeral services will be 1:00pm Tuesday, December 31, 2019 in the Chapel of Leavitt Funeral Home. Interment will follow in Anson Memorial Park. The family will greet friends from 6:00pm until 8:00pm Monday, December 30, 2019 at the funeral home. Barbara was born May 24, 1932 in Anson County, NC a daughter of the late Dock Horace Jordan and Annie Ruth Hooks Jordan. She graduated from Lilesville High School in 1950 and was class Valedictorian. She attended Flora McDonald College and worked as secretary for Avery Hightower Attorney at Law until her retirement in 1997. She was a member of Calvary Episcopal Church in Wadesboro since her confirmation in 1957 and later attended Philadelphia Presbyterian Church in Mint Hill. Surviving are her son, William Franklin Jarman, III and her grandson, William Dock Jarman both of Myrtle Beach, SC; her sisters and brothers-in-law, Sara and Jim Aldridge of Indian Trail, Joyce and Pete Pegram of Henderson, Doris and Stancil Ratliff and Vera and Glenn Trexler both of Wadesboro, Kathy and Claude Canipe of Clayton; her brother-in-law, Haywood Lee of Matthews; her sister-in-law, Kay Jordan of Maiden and her nieces and nephews and their families. In addition to her parents, she was preceded in death by her first husband, William Franklin Jarman; her second husband, Robert Wayne Wolfe; her brothers and sister, Charles Jordan, Horace Jordan and Betty Lee. In lieu of flowers, memorials may be made to Calvary Episcopal Church, PO Box 942, Wadesboro, NC 28170. The arrangements are in care of Leavitt Funeral Home. Online condolences may be made at www.leavittfh.com
To order memorial trees or send flowers to the family in memory of Barbara Jarman Jordan Wolfe, please visit our flower store.