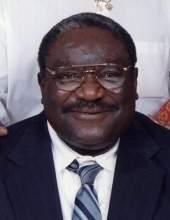 Wadesboro - On Wednesday, February 10, 2021, Mr. Barrington Clark entered into eternal rest at Atrium Health Anson in Wadesboro. There will be a memorial service at 11:00am Saturday, February 13, 2021 in the Chapel of Leavitt Funeral Home. Barrington was born February 1, 1939 in Anson County, NC and was a son of the late Spencer Clark and the late Gertrude Leak Clark. He was educated in Anson County Public Schools. He had worked for a number of years in the pulpwood business and later retired from Pee Dee Electric in Wadesboro. Those left to cherish his memory are his wife of 62 years, Rosa Lee Davis Clark; 4 children, Geretha (Donnell) Tillman, Brenda (Greg) young, Eric Clark, and Tony (Elizabeth) Clark all of Wadesboro; 13 grandchildren; 16 great-grandchildren and 5 great-great-grandchildren; 2 brothers, Franklin Clark and Prentice Clark both of Wadesboro; 1 sister, Linda Bruton of Albemarle and a host of nieces, nephews, cousins, relatives and friends. In addition to his parents, he was preceded in death by his son, Burney Clark, his daughter, Shirley Garris; his sisters, Nannie, Ruth and Odessa and his half sister, Elizabeth.
To order memorial trees or send flowers to the family in memory of Barrington Clark, please visit our flower store.

COVID 19 precautions in place - social distancing and wearing masks at all time.