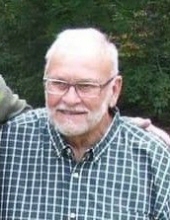 Covington, GA – Mr. Benjamin Thomas Hutchison, 78, of Covington, Georgia, and formerly of Wadesboro, NC, passed away peacefully at home, Thursday, September 10, 2020 surrounded by his family. A graveside service will be held Tuesday, September 15, 2020 at 11:00AM at Bennett Grove Cemetery in Polkton, NC, with Brother BJ Steele officiating. The family will greet friends following the service. Born in Anson County, Ben was a son of the late Benjamin Deberry and Faye Houser Hutchison. He was a great fan of the Carolina Tarheels, no matter which sport or team they were playing. He enjoyed hunting, fishing and going on cruises. Ben attended the Blessed Hope Baptist Church in Conyers, GA. He was a devoted father, grandfather, great-grandfather, brother and friend to many and will be deeply missed by all who knew him. Survivors include his daughter and son-in-law, Vonda and Paul Stoudt of Covington, GA; his grandchildren, BJ and Danielle Steele of Monticello, GA, Thomas Dean Smith of Covington, GA; great-grandchildren, Jason, Bryanna, Carter, Delilah; step-children, Lisa and Al McNutt of Covington, GA, Jason Cole of AL, Brandon Cole of Social Circle, GA, Lindsey McFall, SR; step-grandchildren, Blake and Brenda McNutt, Shane and Kirstie McNutt, Lance McFall, Lindsey and Dominique McFall, Jr.; and his faithful companions – his dog, Missy and cat Blacky. In addition to his parents, Ben was preceded in death by his wife, Linda Hutchison; one grandchild, Angel Rose; and a sister, Edith Hutchison. Leavitt Funeral Home is handling the local arrangements. Online condolences may be made at www.leavittfh.com.
To order memorial trees or send flowers to the family in memory of Benjamin Thomas Hutchison, please visit our flower store.