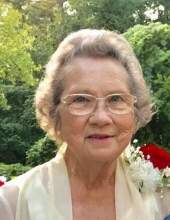 WADESBORO - On Monday, June 28, 2021, Mrs. Betty Jean Horne Traywick, 83, heard the words from her Lord and Savior, "Well done, good and faithful servant enter into the joys of your Lord". Funeral services will be 5:00pm Thursday, July 1, 2021, in the Chapel of Leavitt Funeral Home with Rev. Barry Gerald and Rev. Arnold Jackson officiating. The interment will be private in Marshville City Cemetery. The family will greet friends from 3:00pm until 5:00pm at the funeral home on Thursday. Betty Jean was born August 22, 1937, in Anson County, NC and was a daughter of the late Hoyle Beecher Horne and the late Annie Lou Wallace Horne. She was a graduate of Peachland High School and was retired from Unity Knitting Mills with 30 years of service. A woman of great faith and strong Christian witness, she was a member of First Baptist Church, Wadesboro and attended Calvary Baptist Church in Wadesboro. Her life was a living testimony of her faith and walk with Christ. In addition to her parents, she was preceded in death by her husband of 60 years Curt Traywick, Jr. March 24, 2017, her daughter, Sandy Traywick Deal August 11, 2015, and her son, Bryan Lex Traywick June 9, 2021. Those left to cherish her memory are her children, Mike Traywick of Wadesboro, Ronnie Traywick (Gwen) and Mark Traywick (Beth) both of Marshville and Connie Traywick Rape (Wayne) of Monroe; her son-in-law, Jeff Deal of McLeansville; her grandchildren, Tiffany Traywick Walsh (Bill), Adam Traywick, Amanda Traywick, Caroline Traywick Mullis (Josh), Carson Traywick (fiancé, Amanda Moss), Alexandra Deal Thomas (Chris), Clifton Deal, Austin Rap (Alexis), Jared Rape (Cate), Caleb Reeb (Phallin), Anna Rape and Cason Rape; 9 great-grandchildren and her sisters and brother, Carolyn Ussery of Charlotte, Eldis Caudle (Jerry) and Delane Horne both of Peachland. Others left to remember Betty Jean are her nieces and nephews and their families, cousins and many dear friends. A true southern lady, she was by far the best among southern cooks and hostesses. She was a loving and nurturing caregiver, always putting the needs of others before her own. To know Betty Jean Traywick was to love her. In lieu of flowers, memorials may be made to either First Baptist Church, Sound System Fund, P.O. Box 423, Wadesboro, NC 28170 or to Calvary Baptist Church, 430 Lansford Dr, Wadesboro, NC 28170. The arrangements are in care of Leavitt Funeral Home and online condolences may be made at www.leavittfh.com
To order memorial trees or send flowers to the family in memory of Betty Jean Horne Traywick, please visit our flower store.