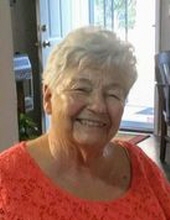 WADESBORO – On Saturday, February 20, 2021, Mrs. Betty Jo Kelly Deese, 79, went to be with her Lord while at Atrium Health Anson in Wadesboro. Funeral services will be 5:00pm Thursday, March 4, 2021 in the Chapel of Leavitt Funeral Home with Rev. Michael White officiating. The family will greet friends one-hour prior to the service on Thursday. A private interment will be on Friday, March 5, 2021 at Anson Memorial Park. Betty Jo was born October 31, 1941 in Anson County, NC and was a daughter of the late Curly Dew Kelly and the late Lillie Mae Carter Kelly. She worked for many years in textiles and retired from Carolina Apparel Group in Wadesboro. Although she was not a member, she attended the Wadesboro Church of God all her life and she sang in the choir. Those left to cherish her memory are her husband of 60 years, Julian Deese; her children, Cathy Deese Grantham of Hartsville, SC and Tim Deese (Joyce) of Polkton; her grandchildren, Rick Davis (fiance' Michelle Williams) and Chase Davis (Tracy Spencer) both of Chesterfield, SC and Jamie Diggs and John Diggs both of Wadesboro; her great-grandchildren, Colbi Griffin (Garrett) of Polkton, Kendal Diggs (fiancé, Brandon Eddins) of Norwood, Alyssa, Jaylynn and Austin Curry, Wyatt Adams and Hunter Blackwell all of Chesterfield, SC and Jorja Diggs of Oakboro; her brother and sister, Wayne Kelly (Linda) of Morven and Julie Grooms (Barry) of Lilesville and her nieces and nephews and their families. In addition to her parents, she was preceded in death by her brothers and sisters, Willie Kelly, Leonard Kelly, Tillie Butler and Mary Ruth Treadaway. Betty Jo will be remembered for loving her family deeply and for her great sense of humor and infectious laughter. The arrangements are in care of Leavitt Funeral Home and online condolences may be made at www.leavittfh.com
To order memorial trees or send flowers to the family in memory of Betty Jo Kelly Deese, please visit our flower store.