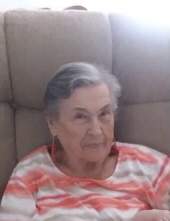 Wadesboro - Our family matriarch Betty Tyson Funderburke was called to her heavenly home on the morning of January 1st, 2021. A service to celebrate Betty’s life will be held at 11:00AM Monday at Anson Memorial Park with Rev. Arnold Jackson officiating. The family requests that all those attending to please wear masks and practice social distancing. There will be no visitation. Betty was born November 29, 1934, in Ansonville NC, one of ten children born to Albert Eason and Beulah Aldridge Tyson. She worked at West Knitting which later became Reeves, Inc. for many years. Betty was also a member of Red Hill Baptist Church in Polkton. Betty was revered by her family for her loving and peaceful spirit. She was a faithful Christian and an example of love to others. She most enjoyed time talking and laughing with her family. She was an amazing cook who was quick to share a meal with those she loved. We will miss her apple dumplings, chocolate cake, deviled eggs, biscuits, and collard greens most. Betty was a selfless and devoted mother, grandmother, and great-grandmother. Her spirit will live on in our hearts, but her earthly presence will be greatly missed. Survivors include her children, Tim Funderburke (Lou) of Polkton, Billy Funderburke of Greensboro, Betty F. Duncan of Hamlet, and Fred Funderburke (Debbie) of Hamlet ; 8 grandchildren, Robbie Funderburke (Tosha), Jennifer Brown (Ryan), Amanda Beller (David), Jamie Funderburke (Katie), Jeremy Funderburke (Stephanie), Tyler Funderburke, Dustin Funderburke (Lindsay), and Matthew Byron Davis; 11 great-grandchildren, Timothy James Funderburke, Abigail Lynn Funderburke, Riley Brown, Charlie Beller, Bayla Sue Funderburke, Bonnie Lee Funderburke, Peyton Riley, Madaylan Riley, Lucy Mae Funderburke, Liam Davis, and Greyson Davis. Also surviving are her brother and sisters, Albert “Smokey” Tyson (Catherine) of Ansonville, Dorothy T. Fitton of Albemarle, Janie Randall (Max) of Polkton, and Nancy McMillan (Jim) of Norwood; and a special niece, Geraldine Johnson. In addition to her parents, Betty was preceded in death by her husband James Lee Funderburke, son Jeff Funderburke, a twin brother, Bobby, as well as five other siblings, Charles Tyson, Glenn Tyson, Joe Tyson, Mary T. Luther, and James “Jimbo” Tyson. The family suggests memorials be made to a charity of the donor’s choice.
To order memorial trees or send flowers to the family in memory of Betty Tyson Funderburke, please visit our flower store.