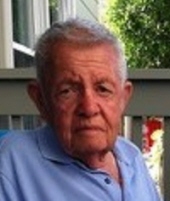 Peachland Mr. Bobby Tice 'Bob' Bowers, 88, passed peacefully from this life to the next on December 24, 2018 from Autumn Care of Marshville with his loving wife by his side. Funeral services will be 3:00PM Sunday, December 30th, in the Peachland Baptist Church with Rev. Rocky Carpenter officiating. Interment will be private. The family will greet friends at the church immediately following the service. Bob was born in Anson County on March 18, 1930, a son of the late George Washington and Ada Horne Bowers. He graduated from Peachland High School and was drafted into the US Army. He served during the Korean Conflict, was wounded during battle, and brought home some shrapnel in his leg which he carried with him the rest of his life. Following his Army days, Bob continued his education at Wingate College. Bob was perhaps best known as the owner and operator of Bowers Service on the square of Peachland for many years before his retirement in June of 2014. Prior to that, he and Roy Dawkins had a gas and oil business delivering fuel oil to residences in the community. Bob was also a faithful member and regular attender at Peachland Baptist Church until his health failed. He filled many roles within the church including serving as a deacon for several years. Bob loved his family and also loved meeting people. A favorite pastime of his was walking on the beach and striking up conversations with those he would meet along the way. Bob also loved getting and eating coconut cakes from honestly, anybody who would make him one. His quick wit, bright eyes and loving manner will be sorely missed by those who knew him. Survivors include his wife of 66 years, Betty Williams Bowers of the home; a daughter, Sharon Bowers Stanley of Breckenridge, CO; a brother, Bill Bowers (Gertrude) of Peachland; and two sisters, Sue Miller (Darrell) of Mt. Airy and Ruth Smith of Atlanta, GA. Memorials may be made to Peachland Baptist Church, PO Box 146, Peachland, NC 28133.
To order memorial trees or send flowers to the family in memory of Bob Bowers, please visit our flower store.