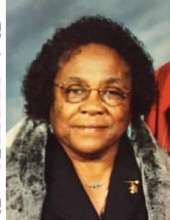 Bonnie Mae Lindsey Ingram was born January 26, 1932 in Anson County, NC and was a daughter of the late Will Lindsey and the late Ellen McRae Lindsey. She entered into eternal rest on Saturday, June 13, 2020 while in the care of FirstHealth Hospice House in West End, NC. She was 88. She was a member of Bessie Chapel AME Zion Church in Lilesville, NC. She was educated in the public schools of Anson County, however, she left school during the 8th grade to be of assistance to her family. It was in her later years that Bonnie Mae went back to school to receive her GED. Bonnie also pursued a career as a Certified Nursing Assistant but spent a number of years working as a seamstress at Anson Shirt Factory in Wadesboro. Although very meek and mild in nature, she was a hard-working woman and was wonderful in many ways. Fishing was among her greatest hobbies. She could spend hours sitting on the banks fishing, eagerly waiting for the cork on her line to sink with a fish on the end! She was such an avid fisherman, she fished with both a pole and a rod and reel. When she had a catch, she would call out to her daughter, Ann and grandson, Jay to help her with her catch. Left to cherish her loving memories are her children, Vera Watkins (Tommy) of Wadesboro, NC, Willie Mae Horne of Charlotte, NC, Anthony Ingram of Durham, NC, Judy Ingram of Durham, NC Patricia Freeman of Baltimore, MD, Rodney Ingram of Wadesboro, NC and Belinda Ann Ingram of the home; 13 grandchildren, including, Alex Ingram of the home, who depended on his Grandmother for special nurturing; 7 great-grandchildren; 4 great-great-grandchildren; and a host of nieces, nephews, relatives and friends. In addition to her parents, she was preceded in death by her sons, Henry Ingram and Ezekiel Ingram; her grandson, her great-granddaughter, Jessica Calloway and her brother and sisters, Ben Lindsey, Rosanna Linton, Viola Ingram and Cora Mae Smith. She will be greatly missed, although gone from our sight yet never to be forgotten. There will be a memorial service at 2:00pm Thursday, June 18, 2020 in the Chapel of Leavitt Funeral Home. The family is gathering at the home of her son, Rodney Ingram on Old Lilesville Road in Wadesboro.
To order memorial trees or send flowers to the family in memory of Bonnie Mae Lindsey Ingram, please visit our flower store.
Send a Sympathy Card

Due to COVID 19 social distancing and safety precautions will be followed.