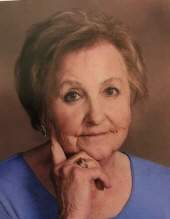 WADESBORO On Sunday, November 3, 2019, All Saints Day, Mrs. Brenda Williams Parker, 73, went to be with the Lord. Funeral services will be 11:00am Wednesday, November 6, 2019 at Lilesville Baptist Church with Rev. Teddy Lawson and Rev. Josh Phillips officiating. Interment will follow in Anson Memorial Park. The family will greet friends from 6:00pm until 8:00pm Tuesday, November 5, 2019 at Leavitt Funeral Home and other times at the home on Tice Street. Brenda was born July 2, 1946 in Richmond County, NC, a daughter of the late Gilbert Williams and the late Nannie Roberts Williams Webb. She and her husband owned and operated, Eagle Insulation for more than 30 years. She was a member of Lilesville Baptist Church where she taught the Joy Sunday School Class. Surviving are her husband of 40 years, Edward Parker; her children, Eddie Beaver of Lilesville, Terri Henry (Tim) of Polkton and David Parker (Leigh) of Wadesboro; her grandchildren, Ashley Beaver of Walterboro, SC , Michael Waller (Pam) of Lilesville, Dennis Waller (Brittany Simon) of Wadesboro, Jonathan Waller (Shelby Greene) of Mint Hill, Remington Steele (Amber Preslar) of Peachland, Cameron Parker and Conner Parker of Wadesboro; her great-grandchildren, Myah Waller and Ayden Waller both of Lilesville; her brother and sisters, Bruce Roberts (Ann) of Wadesboro, Susan Brasseur (David) of Anderson, SC and Naomi Sisk of Tennessee. In addition to her parents, she was preceded in death by her daughter, Lisa Steele and her brother, Gene Williams. In lieu of flowers, memorials may be made to Hospice of Union County, 700 W. Roosevelt Blvd., Monroe, NC 28110. The arrangements are in care of Leavitt Funeral Home. Online condolences may be made at www.leavittfh.com
To order memorial trees or send flowers to the family in memory of Brenda Parker, please visit our flower store.