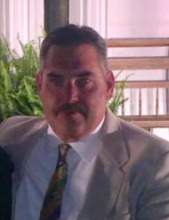 Wadesboro - Mr. Bruce Edward Johnson, 52, died Tuesday, September 10, 2019 at Atrium Health Anson in Wadesboro. Funeral services will be 2:00pm Saturday, September 14, 2019 in the Chapel of Leavitt Funeral Home. Interment will follow in Morven Cemetery. The family will greet friends one hour prior to the service on Saturday at the funeral home. Bruce was born November 6, 1966 in Anson County, NC and was a son of Richard Lee Johnson and Susan Diggs Johnson Ratliff. He was a graduate of Anson High School, Class of 1986 and owned and operated Bruce Johnson Body Shop. Surviving are his children, Kyle Johnson and Kaylan Johnson both of Wadesboro; his grandson, Tidus Simmons; his mother, Susan Ratliff of Wadesboro; his father and step-mother, Richard and Darlene Johnson of Raleigh; his brother and sister-in-law, Jimmy and Jennifer Johnson of Wadesboro; his niece, Maverlee Johnson of Wadesboro; and his aunts and uncles, Faye Diggs and Keith Burr both of Cheraw, SC, Fred and Debbie Johnson of China Grove and James T. Johnson of Loveland, OH. The arrangements are in care of Leavitt Funeral Home. Online condolences may be made at www.leavittfh.com
To order memorial trees or send flowers to the family in memory of Bruce Edward Johnson, please visit our flower store.