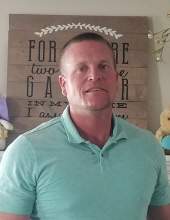 CHERAW, SC – On Tuesday, August 4, 2020 Mr. Bryan Harman Phillips, 43, of Wilmington, NC went to be with his Savior with family by his side, at the home of his parents in Cheraw, SC. The memorial service will be at 2:00pm Saturday, August 8, 2020 in the Chapel of Leavitt Funeral Home, Wadesboro with Matt Cosner officiating. The family will greet friends one hour prior to the service and other times at the home of his parents. Bryan was born January 12, 1977, in Stanly County, NC and was the youngest son born to James Calvin Phillips, Jr. and Catherine Harman Phillips. He was a 1995 graduate of Anson High School and a graduate of North Carolina State University with a degree in Agribusiness. At the time of his passing, he was self employed in roofing and construction in Wilmington. He had also owned and operated Bryan Phillips Trucking and was by far the best produce salesman for Phillips Farms, as he sold peaches at various markets throughout the Wilmington area. A farmer’s market vendor he often worked with said it well, “Bryan was a genuine sweetheart, every single customer ADORED him. He’d carry heavy produce bags to customer cars as older women ogled at him (he had no idea), he’d talk my salt up so much that his customers would hop right into my line. He took a genuine interest and concern in each vendor at the market, Bryan had a way to make everyone feel special. “ He truly had a heart for loving others. Those left to cherish his memory are his parents, Calvin and Cathy Phillips of Cheraw, SC; his brother and sister-in-law, Calvin and Tracie Phillips of Cheraw, SC; his niece and nephews, Elizabeth, Charlie and Sam; his companion, Michelle Adams, who he married on July 31, 2020 as his final request, and her son Preston; his grandmother, Rudelle Phillips of Cheraw, SC; his uncles and aunts, Ted Harman (Nancy) and Andy Harman (Judy) of Jackson Springs, NC, Jan Williams (Art) of Eagle Springs, NC, Donna Cassidy and Richard Phillips (Mollie) of Cheraw, SC and many cousins and their families. He was preceded in death by his grandparents, James Calvin Phillips Sr., Patt Claude, Jr. and Catherine Harman, and his uncle and aunt Patt Claude, III and Linda Harman. Bryan will be remembered as a loving son, brother, uncle, grandson, nephew and friend. He possessed a true gift to make others around him feel special and he had a way of lighting up any room he walked into. He never met a stranger and simply loved everyone without judgement. He was passionate about Christ’s love and for mentoring others who battled addictions. In recent days, he shared with his family that he was at the most peaceful place in his life. He was at peace because he knew where he was going when the Lord called him away. In lieu of flowers, the family requests memorials be made to The Launch Pad, 5001 Wrightsville Ave., Wilmington, NC 28403 or to the Drug and Alcohol Rehabilitation Service of the donor’s choice so that others might be able to fight addiction. The arrangements are in care of Leavitt Funeral Home. Online condolences may be made at www.leavittfh.com
To order memorial trees or send flowers to the family in memory of Bryan Harman Phillips, please visit our flower store.

Due to COVID 19, social distancing, masks and other precautions will be in place.

Due to COVID 19, social distancing, masks and other precautions will be in place.