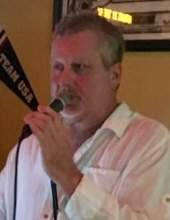 SUNSET BEACH – Mr. Bryan Lex Traywick, 53, of Sunset Beach and formerly of Wadesboro died tragically on Wednesday, June 9, 2021. Funeral services will be 12:00pm Thursday, June 17, 2021, in the Chapel of Leavitt Funeral Home with Rev. Rocky Carpenter and Rev. Arnold Jackson officiating. Interment will follow in Marshville Cemetery in Marshville. The family will greet friends from 6:00pm until 8:00pm Wednesday, June 16, 2021, at the funeral home and on Thursday one hour prior to the service. Bryan was born April 26, 1968, in Union County, NC and was the youngest child of Betty Jean Horne Traywick and the late Curtis Clifton Traywick, Jr. He was graduate of Southview Academy. He was the owner of Lex Entertainment and was well-known throughout the industry and the areas near and around Sunset Beach and Brunswick County for his singing and DJ services and entertaining. Left to cherish his memory are his mother, Betty Jean Traywick of Wadesboro; his brothers and sister, Mike Traywick of Wadesboro, Ronnie Traywick (Gwen) and Mark Traywick (Beth) both of Marshville and Connie Rape (Wayne) of Monroe; his brother-in-law, Jeff Deal of McLeansville; a special friend, Sandra Landrum of Longs; his nieces and nephews and their families; aunts uncles and cousins and many dear friends. In addition to his father, he was preceded in death by his sister, Sandy Deal. The Traywick family would like to express their heartfelt gratitude to the Brunswick County Sheriff’s Department for the unwavering support given by their entire staff to their family and to the family of Thomas “Randall” McDonald and Crime Stoppers for the generous assistance they provided. Because so many of Bryan’s friends have asked and offered to help with expenses, gifts of assistance may be made by using the Crowdfunding link on the obituary in his memory. The arrangements are in care of Leavitt Funeral Home and online condolences may be made at www.leavittfh.com
To order memorial trees or send flowers to the family in memory of Bryan Lex Traywick, please visit our flower store.

Prior to the service