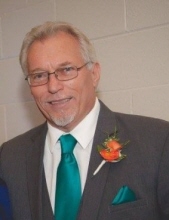 WADESBORO Mr. William Mitchell "Bubba" Truett, Jr., 64, died Saturday, September 21, 2019 at Grand Strand Medical Center in Myrtle Beach, SC. Bubba was at the beach with friends shagging at SOS. Funeral services will be 11:00am Wednesday, September 25, 2019 in the Chapel of Leavitt Funeral Home with Dr. Harry Workman officiating. Interment will follow in Anson Memorial Park with military honors. The family will greet friends from 5:00pm until 7:00pm Tuesday, September 24, 2019 at the funeral home and other times at the home. Bubba was born November 18, 1954 in Columbia, SC, a son of the late William Mitchell Truett and the late Daisy Elizabeth Brown Truett. He was a graduate of Richmond Senior High School and a veteran of the United States Marine Corps. During his time in the military, much of his time was spent around the world working in intelligence. While the end of the Vietnam War had come during his tour of duty, he was stationed off shore in support and intelligence during that time. He was retired from South Piedmont Community College as Assoiciate Vice-President of Facilities with 29 years of service and received an Honorary Associate of Arts Degree from South Piedmont. Among Bubbas favorite past-times were kayaking, shagging with friends from Lake Tillery Shag Club of which he had served as President and spending time with his son, hunting, fishing and simply being outdoors. Surviving are his children, Mitch Truett and wife, Kristin of Wadesboro and Michelle Truett and fianc, Paul Pratt of Morven; his grandchildren, Katelyn Ann Pratt and Henley Truett, who he considered to be lifes greatest blessings; he was also eagerly awaiting the birth of another granddaughter, Madilyn in December; his very special friend and dance partner of 8 years, Ross Huntley of Wadesboro and her children, who loved Bubba like a father, Rachael Strickland and husband, Matt of Durham and Thomas Huntley of Wadesboro. Also surviving are his brother and sisters, James Truett and wife, Amy, Glenda Truett and Ann Truett all of Rockingham and Kathy Barringer of Little River, SC and his mother-in-law, Martha Gulledge of Wadesboro and his sisters-in-law and brothers-in-law, Penny Ratliff and husband, Bill, Van "BoBo" Gulledge and wife, Sarah, Brenda Gulledge and Mickey Gulledge all of Wadesboro, Doris Gulledge, Darlene Gulledge and Wendy Hagin all of Polkton. In addition to his parents, he was preceded in death by his wife, Ann Gulledge Truett and a brother, Wayne Truett. In lieu of flowers, memorials may be made to First Baptist Church, Childrens Ministry, P.O. Box 423, Wadesboro, NC 28170 or Wounded Warrior Project, 1990 Fordham Drive, Suite 100, Fayetteville, NC 28304 or online at https://www.woundedwarriorproject.org The arrangements are in care of Leavitt Funeral Home. Online condolences may be made at www.leavittfh.com
To order memorial trees or send flowers to the family in memory of Bubba Truett, please visit our flower store.