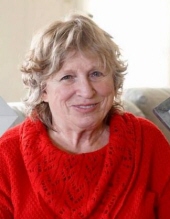 WADESBORO Mrs. Carolyn Ricketts Brewer, 77, died Monday, May 27, 2019 at her home in Cordova. Services will be 11:00am Saturday, June 1, 2019 in the Chapel of Leavitt Funeral Home. Interment will follow in Mt. Beulah Baptist Church Cemetery. The family will greet friends one hour prior to the service at the funeral home on Saturday. Carolyn was born March 16, 1942 in Anson County, NC a daughter of the late Evan Thomas Ricketts and the late Lila Freeman Ricketts. She was a 1960 graduate of Wadesboro High School and was retired from A T & T with more than 20 years of service. As a child, she joined Mt. Beulah Baptist Church and was married there in 1968. Although, living most of her life in Charlotte, Carolyn always considered Wadesboro and Mt. Beulah Church home. Surviving are her son, Vernon "Buddy" Brewer, III and wife, Peiwen; CA; her grandchildren, Victoria Brewer and Archie Brewer all of San Carlos, CA; her brothers, Benjamin Ricketts and Earl Ricketts both of Wadesboro; her step-sister, Shirley Harward of Peachland and her nieces and nephews and their families. The family would like to thank her niece, Bonnie Rainwater for all she has done for Carolyn over the years. In addition to her parents, she was preceded in death by her brother and sister, Paul Ricketts and Betty Baldwin; her step-mother, Bertha Starling Ricketts and her step-brother, Richard Honeycutt. Carolyn will be remembered as a loving mother and grandmother. She enjoyed time spent with her son and his family in California for holidays and any occasion the Ricketts family would get together. She loved home and to her, home meant family. In lieu of flowers, memorials may be made to Mt. Beulah Baptist Church, Cemetery Fund, 3373 Country Club Rd., Wadesboro, NC 28170. The arrangements are in care of Leavitt Funeral Home. Online condolences may be made at www.leavittfh.com Interment following funeral service: Saturday June 1, 2019 Mt. Beulah Baptist Church Cemetery
To order memorial trees or send flowers to the family in memory of Carolyn Ricketts Brewer, please visit our flower store.
Send a Sympathy Card