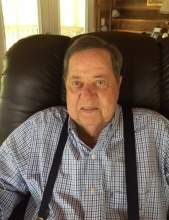 Wadesboro - Mr. Cecil Thomas Meachum, Jr., 73, died Friday, September 7, 2018 at his home. Funeral services will be 11:00am Tuesday, September 11, 2018 in the Chapel of Leavitt Funeral Home with Dr. Warren Nance officiating. Interment will follow in Anson Memorial Park. The family will greet friends from 6:00pm until 8:00pm Monday at the funeral home and other times at the home. Cecil was born July 9, 1945 in Anson County, NC a son of the late Cecil Thomas Meachum and Naomi Louise Helms Meachum of Wadesboro. He was a veteran of the United States Marines, having served during the Vietnam Era and while enlisted, he chose to further his education and received an associates degree. Cecils love and interest in hermetic motors led him to his career as an engineer at TRANE in Charlotte where he worked for a number of years. In 1996, with his expertise in hermetic motors, he established XCEL HERMETICS in Wadesboro in which he owned and operated until his passing. Surviving are his wife, Brenda Gaddy Meachum; his son and daughter-in-law, Tony and Monica Meachum of Rockingham; his grandchildren, Zachary and Molly; his sister, Helen (Fred) Sellers of Lilesville and his sisters-in-law and brother-in-law, Sara Freeman of Chesterfield, SC, Elaine (Johnny) Thomas of Peachland and Jimmy Gaddy of Wadesboro and numerous nieces and nephews and their families. In addition to his parents, he was preceded in death by his sisters and brother, Joyce Henry, Nancy Treadaway, Linda Funderburke, Betty Lou Funderburke, Debbie Ramsey, Louise Bowman, Martha Henry and Jerry Meachum. In lieu of flowers, memorials may be made to Shaundasia T. Smith Foundation1151 Shannon Dr., Wadesboro, NC 28170, or to the charity of the donors choice. The arrangements are in care of Leavitt Funeral Home. Online condolences may be made at www.leavittfh.com
To order memorial trees or send flowers to the family in memory of Cecil Thomas Meachum, Jr., please visit our flower store.