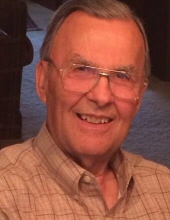 PEACHLAND – Mr. Charles Edward Holder, 82, died Monday, February 17, 2020 at Atrium Health Union in Monroe. Funeral services will be 3:00pm Friday, February 21, 2020 at Peachland Baptist Church with Rev. Jerome Cash and Rev. Phillip Parrish. Interment will follow in Peachland Cemetery with military honors. The family will greet friends one hour prior to the service at the church and other times at the home Charles was born September 24, 1937 in Columbia, TN, a son of the late Clarence Wiley Holder and the late Amy Patterson Holder. He worked as the shop foreman for Cuddy Farms for 12 years and also worked with Dickerson, Inc. He was a veteran of the United States Army. He was a faithful member of Peachland Baptist Church where he served as a deacon and Sunday school teacher. Surviving are his wife, Laura Miller Holder; his daughters, Shelia Robertson (Kenneth) of Winter Haven, FL and Cindy Blue (Tony) of Greensboro; his grandchildren , Adam Robertson (Carrie), Matthew Robertson (Mary Rose), Rachel Garasha (Jed), Samuel Robertson, Joshua Blue (Nicole), Ryan Blue and Cameron Blue and 7 great-grandchildren. Also surviving are his half-brothers and half-sisters who are from Mt. Pleasant, TN. In addition to his parents, he was preceded in death by his first wife, Peggy High Holder and his brother and sister, J.D. Holder and Helen Holder Gulledge. In lieu of flowers, memorials may be made to Peachland Baptist Church, P.O. Box 146, Peachland, NC 28133. The arrangements are in care of Leavitt Funeral Home. Online condolences may be made at www.leavittfh.com
To order memorial trees or send flowers to the family in memory of Charles Edward Holder, please visit our flower store.