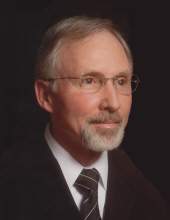 Charles Lee Allison January 25, 1950-December 25, 2020 Charles Lee Allison passed into heaven on Friday, December 25, 2020 after a valiant struggle with Parkinson’s Disease and its complications. He was born in Durham, NC, the oldest child of Lee Grant and Margaret Haithcock Allison, on January 25, 1950. The family moved to Peachland in December 1950 for Lee to accept a “temporary” teaching position at Peachland School. That is when the Allison family put down roots in Anson County. Charles was in the first graduating class of Bowman High School in 1968. He received a B.S. (’72) and M.Ed. (’73) from North Carolina State University, after which he and his wife, Marilyn, returned to Anson County. He also received his National Board Certification for teaching. Charles was a gifted, dedicated, and passionate educator and taught high school science for thirty-eight years. He spent many afternoons staying late to prepare science experiments and labs for the following day. His scientific humor in the classroom is remembered by many students that he taught. During his teaching career, he had the privilege of teaching his three children, all later NC State graduates! They also developed interests in science-related careers. He was always happy to run into former students and colleagues. His professional legacy is remarkable. Charles was a scientist at heart, and this fostered his curiosity about the world around him. He had an unquenchable thirst for knowledge and never stopped learning. He developed hobbies such as bird watching, bee keeping, raising exotic pets, hunting, fishing, reading, Amateur Radio, astronomy, scuba diving, photography, and coaching both baseball and Science Olympiad at Anson Senior High. He was the epitome of a Renaissance man. In middle age, he was a runner, and would enjoy traveling over North Carolina to run in races. He enjoyed taking trips, cycling, and exploring many places with his children. He enjoyed understanding how things work and was always willing to tackle repairs around the house. Granddaughter Ansley once remarked that, “Granddaddy can fix anything!” For many years, Charles honed his photography skills and photographed numerous happy couples on their wedding day. He photographed proms, bridal portraits, and dance pictures. He enjoyed being a part of these special times. He was always a gracious host when the Dutton clan descended on the Allison home for holiday gatherings. His family remembers how he always walked them to their cars to see them safely on their way. If you had luggage or anything else to carry, he insisted on helping. Charles was a faithful member of Peachland Baptist Church, which he attended most of his life and where he held many positions serving the church and its congregation. He will be remembered by many for teaching the Men’s #1 class and presenting the church opening every Sunday. He also served as a Deacon for many years. Charles is survived by his wife of almost fifty years, Marilyn Louise Dutton Allison, and their children, Dr. Holly Allison Kiker, her husband Jason Kiker and their children Ansley, Harrison, Tess, and Hampton of Wadesboro; Adam Lee Allison of Peachland; Dr. Jill Allison Greene, her husband Dr. Ken Greene, and their children, Hattie and Margaret of Shallotte; his brothers and sisters and their families: Harvey and Sandy Allison, Edward and Kathy Allison, Arlene Allison Vinson and husband, Jeff; as well as many nieces and nephews. He is also survived by his “Dutton in-laws,” his wife’s family members Rick and Carolyn Matthews and their children and grandchildren, and Jennie Bailey Dutton and her children. Charles was preceded in death by his parents, his in-laws Myrtle and Gene Dutton, his infant daughter Leah, and his niece Hilary Carpenter. His brother-in-law Joseph Dutton passed on December 25 as well. Services will be private. However, Charles will lie in state at Leavitt Funeral Home on Tuesday, December 29th, from 9:00AM until 5:00PM for those wishing to come by and pay their respects. It is requested that in lieu of flowers, memorial contributions be sent to either: The custodial account for Desi and Kole Dutton. Donations may be sent to Carolyn Dutton Matthews 1857 Faculty Drive Winston-Salem, NC 27106 Email: carolyn@thematthews.ws or Memory and Movement Charlotte 300 Billingsley Road, Suite 108 Charlotte, NC 28211 https://www.mmclt.org/donate/ways-to-give/
To order memorial trees or send flowers to the family in memory of Charles Lee Allison, please visit our flower store.