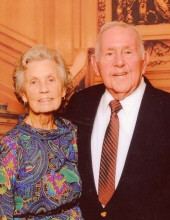 Peachland - Charles Haskell Tarlton, 89, of Peachland, passed away on Monday, February 17, 2020. He was born on October 25, 1930, to the late Alene Grant and Kemp Tarlton. His mother died shortly after his birth and his father remarried Louise Hayes Tarlton, who became a wonderful mother to Haskell and his older brother, Bill. From a very early age, Haskell had a work ethic like no other. While attending Marshville High School, he was a cheerleader, trombone player for the band, and a bus driver. He graduated in 1950 and enlisted in the United States Air Force in 1951. After serving four years in the Air Force, he was honorably discharged in 1955. In July of 1954, he began dating the love of his life, Annette Caudle Tarlton, and they wed July 16, 1955. He attended Wingate College 1957-1958, but then left school and began working as an FDA inspector at poultry processing plants around the state. In 1957, he also began his own farming operation with his father-in-law, William Ashe Caudle. In 1962, he was honored as Anson County’s Young Farmer/Rancher of the year. In 1968, he expanded his poultry farm and grew for Holly Farms, and later for Tyson Foods. Haskell was also a man of faith and loved his community. Upon their marriage, Haskell joined Peachland Baptist Church. It was there that he was ordained as a deacon, served as church secretary, and sang in the choir for more than 50 years. Haskell was also a proud supporter of the Bowman/Anson High School Booster Club for many years. He was a longtime member of the Peachland Men’s Club and was a joyful participant of the “Young Hearts” club at Peachland Baptist Church. More than anything, Haskell loved his family. He would do whatever he needed to do to support his daughters, Anita Tarlton (David Waters) and Becky (Gene) Wall. He was a doting grandfather to Amanda (James) Fuller, Melody (Shannon) Braswell, Andrew Sikes, Brett Barry, Tommy, and Anne Marie Wall. He was also a proud great-grandfather to Carter, Corbin, Charlie, Kemp, and Ruby. We will always remember his trademark whistle that could be heard across the farm and his signature headstand, feats that we still marvel over. We knew we were in trouble when we heard the whistle and saw the bucket hat fly. His grandkids loved every Saturday morning as they were growing up when Papa would come and pick them up for what he referred to as the “Highlight of the Day.” To anyone else, it would be a trip to the dump to haul off dead chickens, but to his grandkids, it was an expected and favorite tradition. Of course, the trip to the store immediately afterward would also be a part of the weekly adventure. It was on these trips that we learned about his enthusiasm for life and humor – telling us to “button our lips” when one of us might have let out a newly learned curse word. Haskell also always had a golf cart. The grandkids remember all the wrecks and casualties from his “Flintstone Mobile,” and also remember papa’s face turning so red when we’d promptly do whatever he told us not to. To date, his grandson Tommy is the only grandchild who has not wrecked the golf cart (yet). While Haskell rarely played the radio in his truck, he did love Elvis and often played the album on road trips. He could always be found outside and working, rain or shine. If you couldn’t find him mowing the yards in Peachland, then you would most likely find him at “Charlie’s Place,” a beloved family vacation home in Garden City Beach, SC. In addition to his wife, Annette, daughters, grandchildren, and great-grandchildren, Haskell is survived by his brothers and sisters, Kenneth (Ann) Tarlton, JC (Mary) Tarlton, Elaine (David) Kiker, and Mildred Davis. He is also survived by many nieces, nephews, and cousins. He is preceded in death by his brother, Bill (Inez) Tarlton, and sister, Myrtle (Bob) Carpenter. There will be a service to celebrate the lives of Haskell and Annette Caudle Tarlton at 3:00pm Saturday, February 22, 2020 at Peachland Baptist Church with Rev. Jerome Cash officiating. The family will greet friends from 1:00pm until 3:00pm Saturday in the church fellowship hall. In lieu of flowers, the family requests donations be made to Peachland Baptist Church, P.O. Box 146, Peachland, NC 28133.
To order memorial trees or send flowers to the family in memory of Charles Haskell Tarlton, please visit our flower store.