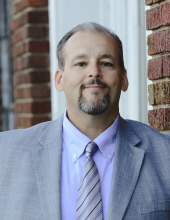 LANCASTER, SC – On Friday, March 19, 2021, Mr. Christopher Kerry “Papa F” Foster, 55, went to be with the Lord, surrounded by his wife and children. The family will greet friends from 11:00am until 1:00pm Tuesday, March 23, 2021 at Living Praise Christian Ministries in Monroe with the funeral service following. Interment will follow in Forest Lawn East Cemetery. The service will be shared live on the Leavitt Funeral Home Facebook page. Chris was born June 17, 1965 in Bethesda, MD and was a son of Carolyn Reams Foster and the late Howard Charles Foster. He was a 1983 graduate of Garinger High School. He has served on Hickory Grove Fire Department, Fort Mill Volunteer Fire Department and Midland Volunteer Fire Department. He worked extensively in the flooring industry in earlier years. He was currently a Realtor with Keller Williams Union County. He was an avid outdoorsman and enjoyed hunting with his brother, nephews and sons-in-law and fishing with his grandchildren. He did a phenomenal job with cooking a BBQ Pig and enjoyed times spent at Oak Island. But above all he loved spending time with his wife, children and grandchildren. Chris was an active member of Living Praise Christian Ministries in Monroe, where he had served as the youth leader with his wife for more than 20 years. They formerly served as youth leader at New Life Church of God in Monroe prior to Living Praise Christian Ministries. The lives of many young people have been changed and redirected due to the influence Chris had on their lives and his legacy will live on in the lives of his family and those he ministered to. Those left to cherish his memory are his wife, Tricia Mills Foster; his daughters, Megan Boland (Daniel) of Lancaster, SC, Nicole Benton (Chad) of Weddington, NC and Morgan Foster (Manning Taylor) of Heath Springs, SC and his four-legged daughter, Roxanne; his grandchildren, Ryan Benton, Remington Boland, Charlie Foster, Maverick Benton, Reagan Boland and baby Boland who is due to arrive in August; his mother, Carolyn Foster of Monroe; his father-in-law and mother-in-law, Kenneth and Frances Mills of Fort Mill, SC; his brother and sister, Kevin Foster (Elizabeth) of Matthews and Carla Stevens (Marvin) of Monroe; his sister-in-law, Brandi Mills of Washington, NC; his brother -in-law, Brady Mills of Atlanta, GA and his nephews and nieces, Jacob Foster (Emilie) of Germany, Alex Foster of Columbia, SC, Jordan Leggett and Sydney Leggett (Charlie Price) both of Greenville, NC and Ashley Bridges of Rock Hill, SC. In addition to his father, he was preceded in death by an infant son, Hunter, “Paw Paw” Anthony Ferrera and his Reams and Black grandparents. Those who desire may make a memorial contribution in lieu of flowers to Living Praise Christian Ministries, 2691 W. Roosevelt Blvd., Monroe, NC 28110. The arrangements are in care of Leavitt Funeral Hone and online condolences may be made at www.leavittfh.com
To order memorial trees or send flowers to the family in memory of Christopher Kerry Foster, please visit our flower store.