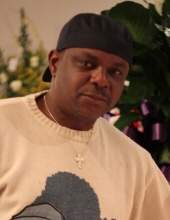 Wadesboro - Christopher Smith, “AKA Chris” was born February 14, 1971 in Anson County to the late Roosevelt Smith and the late Reatha Mae Smith Burr. He was one of seven children. Christopher grew up in Lilesville and attended Anson County public schools and later he fulfilled his goal to receive his GED. Chris was known for his sense of humor, loving to joke around and do card tricks. He never met a stranger and he loved spending time with family and friends. In addition to his parents, he was preceded in death by his brother, Maurice R. Smith. He leaves to cherish his loving memories, his sons, Xauvier Gainey, Devonta Bennett and Jaylan Smith all of Wadesboro, NC; his daughter, Bria Smith of Winston-Salem, NC; his grandson, Royalty Bennett of Winston Salem, NC; his stepfather, David Burr of Wadesboro, NC; his sisters, Rosa Clark (Tommy) of Wadesboro, NC, Mae Smith (Charlie) of Jonesboro, GA, Eliza C. Sheppard (Burkhard) of Monroe, NC, Retha Little (Tim) of Lilesville, NC and Ann Ellerbe of Jonesboro, GA; a host of nieces and nephews and their families; and his uncle, James Lindsey (Christine) of Wingate, NC and a special friend, Tamica Sturdivant. The funeral service is 2:00 pm Sunday, August 15, 2021, in the Chapel of Leavitt Funeral Home. Interment will follow in Henry Grove Baptist Church Cemetery in Lilesville. The public viewing will be Saturday from 2:00 pm until 5:00 pm at the funeral home and the family is meeting at the home of his sister on 66 Dogwood St.
To order memorial trees or send flowers to the family in memory of Christopher Smith, please visit our flower store.