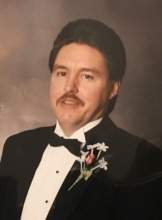 POLKTON Mr. Charles Curtis "Chuck" Bowers, Jr., 61, died Monday, November 12, 2018 at his home. Funeral services will be 11:00am Friday, November 16, 2018 at Hopewell United Methodist Church with Rev. Patrick Ledford officiating. Interment will follow in the church cemetery. The family will greet friends from 5:00pm until 7:00pm Thursday, November 15, 2018 at Leavitt Funeral Home, Wadesboro. Chuck was born January 22, 1957 in Anson County, NC a son of the late Charles Curtis Bowers and the Ellen "Gay" Helms Bowers. He was a graduate of Bowman High School and North Carolina State University. He worked with Anson County Schools for more than 25 years, teaching the Career Explorations which later became Technologies. He was also the director of the drivers education program for the school system. Surviving are his daughter and son-in-law, Brittney and Michael Thomas of Myrtle Beach, SC and his son, Drake Bowers of Norwood; his brothers and sister-in-law, Darryl and Kristin Bowers of Charlestown, WV and Derrick Bowers of Polkton and his niece and nephews. In lieu of flowers, memorials may be made to Hopewell United Methodist Church Cemetery Fund, c/o, Susie McSwain, 424 Pork Rd., Peachland, NC 28133. The arrangements are in care of Leavitt Funeral Home. Online condolences may be made at www.leavittfh.com
To order memorial trees or send flowers to the family in memory of Chuck Bowers, please visit our flower store.