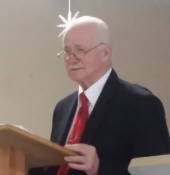 Morven- Mr. Clarence Wilson 'Clay' Burr, Jr., 78, died Wednesday, June 5, 2019 at his sons home in Gold Hill. Funeral services will be 1:00pm Saturday, June 8, 2019 at Leavitt Funeral Home with Rev. Tommy Wensil officiating. Interment will follow in Morven Cemetery. The family will greet friends two hours prior to the service beginning at 11:00am at the funeral home. Clay was born October 7, 1940 in Anson County, NC a son of the Late Clarence Wilson Burr, Sr. and Lula Mae Melton. He was the former Police Chief of Morven and had also worked as a correctional officer at Southern Correctional Institution in Troy and Anson Correctional Institution in Polkton. Clay owned and operated Southeastern Piedmont Door Systems until his retirement. He loved fishing and the outdoors. He accepted a call into Gospel ministry and was most noted for his nursing home ministry in Anson County, especially at Meadowview Terrace Assisted Living in Wadesboro. He is survived by his four sons, Clarence Wilson "Buddy" Burr, III of Wadesboro, Bryan (Shonna) Burr of Gold Hill, Darryl Burr of Aquadale and Justin (Kim) Burr of Wadesboro; his grandchildren, Cherish, Bryan Christian, Camron, Matthew, Krystal, Dalton and Kalista; his great-grandchildren, Serenity, Charity, Brooklyn, Jaxon, Daylee, Karoline, Wyatt, Kavery, Zachery and Autumn. Also surviving are his sisters, Alice Hough, Barbara Kendall, Lola Davis and Christine Kelly. In addition to his parents, he was preceded in death by a daughter, Juanita Ann Burr; and his siblings, Albert Burr and Sara Nelson. Memorials may be made to Anson Community Hospice, 1119 US HWY 1N Rockingham, NC 28379 or Hospice of Stanly & the Uwharrie, 960 North First Street Albemarle NC 28001. The arrangements are in care of Leavitt Funeral Home. Online condolences may be made at www.leavittfh.com
To order memorial trees or send flowers to the family in memory of Clarence Wilson Clay Burr, Jr., please visit our flower store.