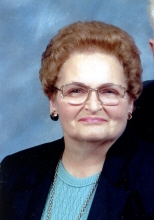 WADESBORO - Mrs. Cornelia Winfree Tucker, 93, died Wednesday, December 11, 2019 at Anson Health and Rehab in Wadesboro. Funeral services will be 4:00pm Saturday, December 14, 2019 in the Chapel of Leavitt Funeral Home. Interment will follow in Anson Memorial Park. The family will greet friends one hour prior to the service Saturday at the funeral home. Cornelia was born April 19, 1926 in Anson County, NC the only daughter of the late Elmer Gideon Winfree and the late Mozelle Ridenhour Winfree. She graduated from Wadesboro High School in 1944 and attended Women's College in Greensboro. She was retired from J.B. Watson and Company in Wadesboro and was a member of First United Methodist Church where she taught Sunday School for many years. Surviving are her daughter, Anne Tucker Tice and her boyfriend, Teddy Liles of Hamlet and her nieces and nephews from both the Winfree and Tucker families. In addition to her parents, she was preceded in death by her husband of 52 years, James Winfred 'Jim' Tucker and her son-in-law, Joe Tice. The family woud like to thank the staff of Lillie Bennett Nursing Center, now Anson Health and Rehab for the excellent care they gave Cornelia while she as a resident there. A special thank you to Vivian Wallace and Zeater Ingram. In lieu of flowers, memorials may be made to First United Methodist Church, 118 E. Morgan St.,. Wadesboro, NC 28170 or or to Friend of The Anson County Animal Shelter, c/o, Jan Taylor, 121 Trexler Dr., Wadesboro, NC 28170 or to Anson Health and Rehab, Family and Resident Council, 405 S. Greene St., Wadesboro, NC 28170. The arrangements are in care of Leavitt Funeral Home. Online condolences may be made at www.leavittfh.com
To order memorial trees or send flowers to the family in memory of Cornelia Winfree Tucker, please visit our flower store.
Send a Sympathy Card