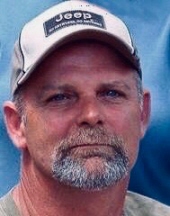 POLKTON - Mr. Daniel Edward Carpenter, 56, celebrated his heavenly healing on Sunday, February 3, 2019 at Hospice of Union County in Monroe after battling cancer. Danny was born March 19, 1962 in Richmond County, NC a son of Carol Downer Griffin. He had worked as a heavy equipment operator at B.V. Hedrick Gravel and Sand and enjoyed running bulldozers. Danny will be remembered as a Christian man and an avid outdoorsman who loved hunting, fishing, guns, Jeeps and most of all his family. Survivors include his wife, Vickie Freeman Sellers Carpenter and his "Punkin" Jaycee Carpenter of the home; his children, Randell Sellers (Bailey) of Ruby, SC, Samantha Mabry (Adam) of Polkton and Tiffney Carpenter (Dustin Pratt) of Wadesboro; his grandchildren, Case Sellers and Noah Mabry; his mother, Carol Griffin of Lilesville; his sisters, Donna Parsons of Lilesville and Lori Roberts (Steve) of Albemarle; a special cousin, Mike Welch (Terry) of Lilesville, who was more like a brother and his "hydraulic buddy", Joey Ricketts (Debbie) of Lilesville. Danny was preceded in death by his grandson, Aaron Jacob "A.J." Mabry and his uncle, Edward Bruce Downer. A memorial service will be held at 3:00pm Friday, February 8, 2019 at New Life Church, located at 610 Camden Road, Wadesboro, NC 28170 with Pastor Chris Jackson and Mike Welch officiating.. The arrangements are in care of Leavitt Funeral Home. Online condolences may be made at www.leavittfh.com
To order memorial trees or send flowers to the family in memory of Danny Carpenter, please visit our flower store.