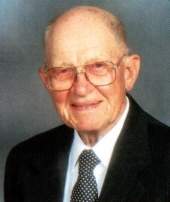 WADESBORO Mr. David Cleveland Parker, 100, died Sunday, October 21, 2018 at the North Carolina State Veterans Home in Kinston, NC. Funeral services will be 2:00pm Thursday, October 25, 2018 at First Presbyterian Church, Wadesboro with Mr. Ken Goins, CLP, officiating. Entombment will follow in Anson Memorial Park Mausoleum. The family will greet friends one hour prior to the service in the church fellowship hall. David was born June 30, 1918 in Pitt County, NC a son of the late Jesse Cleveland Parker and Gladys Thompson Parker. He graduated high school in Fountain, NC and North Carolina State University with a degree in Animal Husbandry. He was a veteran of the United States Navy, having served during World War II. David owned and operated Parkers Farm and Home Supply in Wadesboro and Anson Memorial Park. Prior to declining health, he was an active member of First Presbyterian Church, Wadesboro where he served in several capacities including, Elder, Deacon and Usher. He was also a long-time member of the Wadesboro Civitan Club. Surviving are his son and daughter-in-law, Wayne and Brownie Parker of Raleigh; his grandchildren, Ashley Murphy and husband, Dan of New Bern, Jason Parker and wife, Cynthia of Lewisville and Grant Parker of Pinehurst; his great-grandchildren, Danny, Parker and Rheagan Murphy and Ashlyn and Gabriel Parker; and his brother, Alan Parker of Salisbury. In addition to his parents, he was preceded in death by his wife, Mary Bullock Parker and 7 brothers and sisters. In lieu of flowers, memorials may be made to First Presbyterian Church, P.O. Box 351, Wadesboro, NC 28170. The arrangements are in care of Leavitt Funeral Home. Online condolences may be made at www.leavittfh.com
To order memorial trees or send flowers to the family in memory of David Cleveland Parker, please visit our flower store.