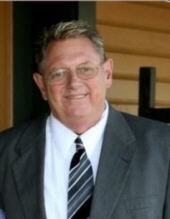 Hamlet - Mr. Donald James Griggs, 64, died Sunday, April 15, 2018 at his home. Funeral services will be 11:00AM Wednesday, April 18, 2018 at Kings Gate Church with Apostle Eddie McLean and Rev. Jerry Smith officiating. Interment will follow in Richmond County Memorial Park. The family will greet friends from 6:00pm until 7:30pm Tuesday, April 17, 2018 at the church and other times at the home of Amy and Mac Tucker. Donald was born August 31, 1953 in Richmond County, NC, a son of the late J.B. Griggs and the late Dorothy Elizabeth Moore Griggs. He was retired from Abbott Laboratories in Laurinburg and was a member of Kings Gate Church. Surviving are his daughters, Amy Griggs Tucker (Mac), Traci Griggs Morrison (MIke) and Lauren Griggs (Nick Moore) all of Hamlet; his grandchildren, Caleb Neeley, Cameron Neeley, Alden Morrison, Brayden Morrison, Kyleigh Morrison, Kelby Morrison, Aniston Griggs and Nicholas Griggs all of Hamlet; his sister, Carolyn Smith Rockingham; his father-in-law and mother-in-law, Leon and Virgina Baker of Rockingham and his brothers-in-law, Glenn Caulder and Ken Caulder both of Wadesboro. In addition to his parents, he was preceded in death by his wife, Deborah Baker Griggs and his brothers and sisters, Jerry Griggs, Ronnie Griggs, Terry Griggs, Grace Currie and Margie Nelson. In lieu of flowers, memorials may be made to Kings Gate Church, 161 Sierra Ave., Hamlet, NC 28345 The arrangements are in care of Leavitt Funeral Home. Online condolences may be made at www.leavittfh.com
To order memorial trees or send flowers to the family in memory of Donald James Griggs, please visit our flower store.
Send a Sympathy Card