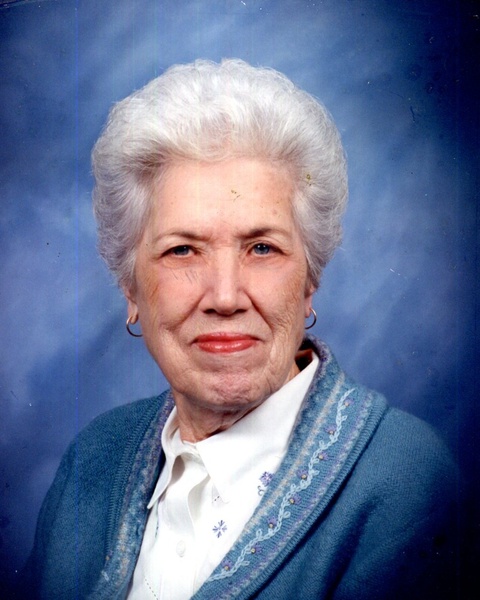 WADESBORO – On Thursday, Mrs. Edna “Meme” Hall Baker, 96, peacefully went to be with her Lord at Anson Health and Rehab in Wadesboro.

The family will greet friends one hour prior to the service and other times at the home of her daughter on Wildwood Street in Wadesboro.

Edna was born May 19, 1926, in Macon County, TN and was a daughter of the late Thomas Porter Hall and the late Anna Lou Hammons Hall. She graduated high school in Tennessee and met a young man, Henry Hurley Baker from Wadesboro stationed in Tennessee with the United States Air Force. They met at the famous Ryman Auditorium in Nashville, TN. She and Hurley made their home in Wadesboro to be near his family.

Meme, as she was lovingly named by her “first” grandchild in the neighborhood, Ericka Johnson Chaney, was devoted to her family and friends. She loved her family dearly and was especially proud of her grandchildren and great-grandchildren. Everyone who knew Meme, loved her and she loved being everyone’s Meme in return.

Meme worked at West Knitting Mills in Wadesboro until her retirement at age 65 when the mill closed. Following retirement from West Knitting, she worked at Walmart in Wadesboro, first in the pharmacy and later became one of their popular greeters. She loved her job there and especially enjoyed seeing all of the customers. She retired from Walmart at age 84, but throughout the rest of her life, people she met often commented that they remembered her as one of the greeters.

The oldest and a long-time member of Deep Creek Baptist Church, Meme was active with the WMU as well as a member of the Melissa Ratliff Sunday School Class. In her early years, she taught Sunday school and later enjoyed participating with the senior adult ministry and taking trips with them.

In her earlier years, Meme also enjoyed traveling with her lifelong friends: Jackie, Ruth, Myrtle and Frances. She loved sharing the stories of their adventures with everyone she met.

Her family is most appreciative to the staff at Anson Health and Rehab for their loving care as part of Meme’s extended family. She always looked forward to the activities, especially bingo. Meme was once a faithful Burger King bingo player on Tuesday nights in Wadesboro for many years and was happy to continue playing throughout her life.

Those left to cherish Meme’s memory are her daughters, Debbie Jarman of Wadesboro and Linda Pilkenton (Eric) of Lenoir: her grandchildren, Adam Jarman (Lauren) of Charlotte, Emily Trexler (Dave) of Wadesboro, John Jarman (Nicole) of Peachland and Justin Jarman (Shelley) of Wadesboro; her great-granddaughters, Avery Jarman, Abby Trexler and Alyssa Trexler: her brother-in-law, Rev. D.W. Carpenter of Wadesboro, along with her extended Baker family and Anson Health and Rehab family.

In addition to her parents, she was preceded in death by her husband, Henry Hurley Baker in 1975, her brothers Jim and Glenn Hall, and sisters-in-law, Willie Carpenter and Frances Hall, as well as many other cherished Baker family members.

In the words of Meme, “I mean, uh, you know what I mean…I am grateful for a good long life and for all my blessings.”

To order memorial trees or send flowers to the family in memory of Edna "Meme" Hall Baker, please visit our flower store.
Send a Sympathy Card