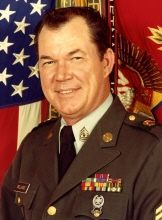 LILESVILLE Mr. Elmer "Bud" Williams, US Army RET, 77, died Saturday, May 4, 2019 at Hospice of Union County in Monroe. Services will be 4:00pm Wednesday, May 8, 2019 by the graveside in Lilesville Cemetery with full military honors. The family will greet friends following the service. Bud was born May 18, 1941 in Anson County, NC a son of the late Edward Thomas Williams and the late Beulah Ricketts Williams. He was retired from the United States Army and following his retirement he worked as a correctional officer at Anson Correctional Institute in Polkton. Surviving are his wife, Ursula Lipp Williams; his children, Edward Williams of Lilesville and Jacqueline Ricketts (Dennis) of Wadesboro; 3 grandchildren; 2 step-grandchildren; 5 great-grandchildren; his sisters and brother, Winnie Williams, Frances Gathings, Louise Almanza and Ronnie Williams and his nieces and nephews on both the Williams and Lipp sides of the family. In addition to his parents, he was preceded in death by a son, Jimmy Williams and brothers and sisters, Van Williams, Tommy Williams, Ralph Ricketts, Calvin Williams and Margaret Chewning. The arrangements are in care of Leavitt Funeral Home. Online condolences may be made at www.leavittfh.com Visitation following the service: 111 Church St. Lilesville, NC 28091 Wednesday May 8, 2019 Lilesville Cemetery
To order memorial trees or send flowers to the family in memory of Elmer Williams Army US RET, please visit our flower store.