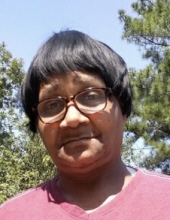 Wadesboro - Emma Jean Gunter was born in Wadesboro, Anson County, NC on august 23, 1958 and was the oldest child of Ada Cash and William Buck Melton. After a courageous battle with cancer, she became a victor over death and was welcomed into the kingdom of Heaven on Friday, November 6, 2020 while not only being cared for but unconditionally loved by her children and their spouses. She was the tender age of 62 when she received joy as the angels escorted her into Heaven. She attended Bowman High School until her 10th grade year. She picked peaches with her mother, Ada Cash in her adolescent years of life in the Pee Dee community of Anson County. She worked at Little Cotton Mill in Wadesboro for several years; however, she eventually left the work force and went on to become the best homemaker and caretaker alone could ever know. She not only cared for her children, but also her mother and all her siblings until she was called home. She attended Bowen’s Chapel Church on HWY 52 North in Wadesboro and this is the church where she was baptized. She leaves to honor her precious memories, her children, Billy Junior Gunter and Lateesha Jackson Hankerson both of Wadesboro, NC; her daughter-in-law, Monica Renee Gunter and her son-in-law, Jasper Eddie Louis Hankerson, Jr.; her grandchildren, Billy Jaquevais Gunter, Deontrey Montavious Gunter, Kierra Jaquasha Gunter, Akeelah Jae’ona Jasper Hankerson, Jasper Eddie Louis Hankerson, III and one step-grandchild, Jahnasty Jiasha Blackmon; her siblings, John William Melton, Joe Frank Melton and Ruby Melton all of Wadesboro; 2 sisters-in-law, Peggy Melton of Morven, NC and Lavern Melton of Wadesboro, NC; 5 nieces; 4 nephews;5 great-nieces; 1 great-nephew; 4 uncles and 2 aunts. Funeral services will be 2:30pm Thursday, November 12, 2020 in the chapel of Leavitt Funeral Home. Interment will follow in Williams Cemetery in Polkton.
To order memorial trees or send flowers to the family in memory of Emma Jean Gunter, please visit our flower store.