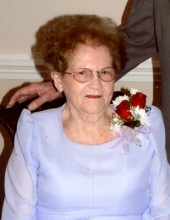 WADESBORO Mrs. Estelle Brower Bailey, 90, died Thursday, October 4, 2018 at Carolinas Medical Center Union in Monroe. Funeral services will be 3:00pm Saturday, October 6, 2018 in the Chapel of Leavitt Funeral Home with Rev. Tom Walden officiating. Interment will follow in Anson Memorial Park. The family will greet friends one hour prior to the service Saturday and other times at the home. Estelle was born in Anson County, NC a daughter of the late William L. "Bill" Brower and the late Jessie Katherine Elizabeth Cranford Brower. She was a graduate of Wadesboro High School and graduated from cosmetology school in Albemarle. She was a hairdresser in Wadesboro for 50 years prior to retiring in 2003. She was a member of First Baptist Church, Wadesboro since childhood and served on various committees and worked with the childrens departments. Surviving are her husband of 70 years, Buford Liles Bailey; her daughters and sons-in-law, Jerrie and Jerry Taylor of Monroe and Kathy and Ed Huntley, Jr. of Lilesville; her granddaughters and their husbands, Wendy Taylor Lane an Joe of Matthews, Amanda Cook Burr and Jeff of Lilesville and Monica Cook Polston and Donald of Wadesboro; her great-grandchildren, Morgan Burr, Hailey Brock and fianc, Cody Howell, Aubrey Burr, Noah Brock, Sarah Burr, Daniel Lane, Annie Brock, McKay Burr, Elizabeth Lane and Emily Lane. In addition to her parents, she was preceded in death by her brothers, Kenneth Thomas Brower, William L. Brower, Jr., Jerry H. Brower and Reginald F.D. Brower. In lieu of flowers, memorials may be made to the American Bible Society, 101 North Independence Mall East FL8, Philadelphia, PA 19106-2155 or to the charity of the donors choice. The arrangements are in care of Leavitt Funeral Home. Online condolences may be made at www.leavittfh.com
To order memorial trees or send flowers to the family in memory of Estelle Brower Bailey, please visit our flower store.