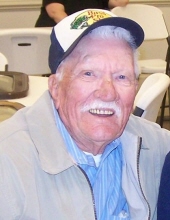 ROCKINGHAM – On Wednesday, March 3, 2021, Mr. Eugene Thomas Maree, 92, of Rockingham and formerly of Wadesboro, went to be with his Lord and Savior. Services will be 3:00pm Sunday, March 7, 2021 by the graveside in Anson Memorial Park in Wadesboro with Rev. Jason Lutz officiating. The family will greet friends following the service at the cemetery. Thomas was born September 19, 1928 in Anson County, NC and was a son of the late James Maree and the late Bessie Jane Butler Maree. He was a veteran of the United States Air Force. He retired from Wade Manufacturing in Wadesboro where he first worked at age 14 sweeping the floors. After serving in the Air Force, he returned to Wade and his career there spanned more than 50 years. He was a member of Cartledge Creek Baptist Church. Those left to cherish his memory are his daughter, Wanda Ussery (Mike) of Rockingham; his daughter-in-law, Suzie Moore of Rockingham; his grandchildren, Christina Brown (Danny) of Concord, Angie Burr and Carrie Jane Ussery both of Rockingham and Michael Ussery of Wilmington; his great-grandchildren, David Burr (Alysah) of Rockingham and Gracie Brown and Jacob Brown both of Concord; his great-great-grandchildren, Nevaeh Burr and Paxton Burr both of Rockingham; his sister and brothers, Pauline Pope and Claude Maree (Vivian) both of Wadesboro and Allen Maree of Rockingham. In addition to his parents, he was preceded in death by his wife, Louvenia J. Maree, his son, David Maree and his brother and sisters, James Maree, Magdalene Williams, Pansy Baker and Bessie Faye Gregory. In lieu of flowers, memorials may be made to Cartledge Creek Baptist Church, 152 Ben Hudson Rd., Rockingham, NC 28379 or to Richmond County Hospice Haven, 1119 N US 1 HWY, Rockingham, NC 28170. The arrangements are in care of Leavitt Funeral Home and online condolences may be made at www.leavittfh.com
To order memorial trees or send flowers to the family in memory of Eugene Thomas Maree, please visit our flower store.
Send a Sympathy Card