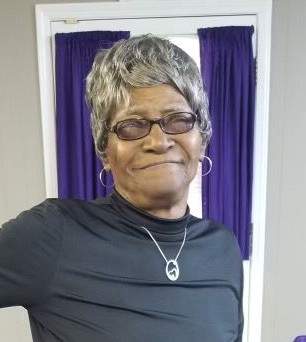 Wadesboro - On Friday, August 27, 2021, Evelyn Smith, was called home to be with her Lord and Savior Jesus Christ while a patient at Atrium Health in Monroe.

She was born July 3, 1947, in Anson County, NC and was a daughter of the late Ephram Smith and the late Ola Sturdivant Smith.
Evelyn was a graduate of the General Education Development Program from Anson Technical Institute, which is now South Piedmont Community College, receiving her High School Diploma equivalent.
A faithful follower of Christ, she was a long-time member of Flake’s Chapel Missionary Baptist Church in Wadesboro and was faithful until her health declined.
She leave to cherish her loving legacy and memories: her children, Thomas Smith (Linda), Mary Ann Little (Frank), Sarah Robinson (Harvey), Dale Smith (Lisa) and Wanda Smith (Memphis); her grandchildren, John Smith (Keisha), Noah, Shinitra, Little Man, Scotter, Teeny, Dre, Desmond, Jaila, Janiha, Stacey and Jordan; her sisters and brother, Martha Smith, Margaret Morman, Johnny Smith and Francis Smith; her sister-in-law, Mary Smith; a special daughter, Lateeah Reed and a host of great grandchildren, nieces, nephews and other family members and friends.
In addition to her parents, she was preceded in death by a daughter, Judy Smith, her grandson, Steven and her sisters and brothers, Mable Henry, Viola Smith Mattie Liles, Elizabeth Smith, Willie Smith, Jessie Smith and Jimmy Smith.

Homegoing services will be 3:00 pm Wednesday, September 1, 2021, in the Chapel of Leavitt Funeral Home. Burial will follow in the Flake's Chapel Church Cemetery.

Public viewing will be 5:00 pm until 7:00pmTuesday, August 31, 2021, at Leavitt Funeral Home and the family will be at their home on West Avenue in Wadesboro.

Face masks/coverings are required while in the funeral home for the viewing and the service.

To order memorial trees or send flowers to the family in memory of Evelyn Smith, please visit our flower store.