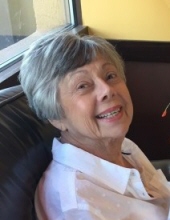 ANSONVILLE - Evelyn Ponds Sullivan, 84, passed away on Wednesday, July 11, 2018 after fighting a courageous 4 year battle with ovarian cancer. Evelyn was born January 2, 1934 in Ansonville, NC a daughter of the late Clyde and Lilly Lawhon Ponds and she lived her entire life in Ansonville. She graduated from Ansonville High School in 1952 and her first job was at the Bank of Ansonville. The remainder of her career was as Payroll Clerk at West Knitting Mill. During her retirement, she enjoyed numerous travels and was an avid bridge player. Surviving are her husband of 62 years, Cary M. Sullivan, her daughter Marsha Sullivan (Colin) of Cairo, Egypt, Cary M. Sullivan Jr. (Laureen), and grandchildren Carson J. and Connor L. Sullivan, as well as great grandchild and namesake, Copelyn Eve Sullivan all of Charlotte, NC. Other cherished family members include her sister, Edith P. Thompson of Ansonville, and numerous nieces and nephews and their families. In addition to her parents, she was preceded in death by her brother, Vance Ponds and sister, Myra Emter. There will be a memorial service at 5:00pm Thursday, July 12, 2018 at Ansonville United Methodist Church with Rev. Robert Burr officiating. The family will greet friends following the service. A private inurnment will be at a later date in Bethlehem Cemetery. In lieu of flowers, memorials may be made to Ansonville United Methodist Church, c/o Nancy Lee, 120 Randall Rd., Wadesboro, NC 28170 or The Friends of the Hampton B. Allen Library, 120 S. Greene St., Wadesboro, NC 28170. The arrangements are in care of Leavitt Funeral Home. Online condolences may be made at www.leavittfh.com Visitation following the service: 9655 HWY 52 N Ansonville, North Carolina 28007 Thursday July 12, 2018 Ansonville United Methodist Church
To order memorial trees or send flowers to the family in memory of Evelyn Ponds Sullivan, please visit our flower store.