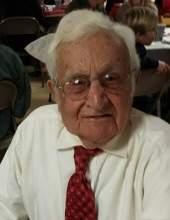 Wadesboro – Mr. Fred Ross Marsh, 98, died peacefully on Tuesday, December 1, 2020, while a resident at Wadesboro Health and Rehab. A service to celebrate his life will be held at 11:00AM Friday, December 4th, at First United Methodist Church with Rev. Dr. Sarah Kalish officiating. Interment will follow at Anson Memorial Park. Due to Covid-19, the family does not plan to hold a visitation. Born in Anson County on September 10, 1922, Fred Ross was one of 12 children born to Elisha and Glennie Flake Marsh. He was a well-known and highly sought after carpenter who could build or mend nearly anything made of wood. As a younger man, he built houses and also did home additions, adding on rooms or general remodeling. His spare time was spent building tree houses, bird houses and other structures of a smaller scale. He was also a longtime member of First United Methodist Church and much loved member of the Wesley Men’s Bible Class. Survivors include a daughter, Martha M. Brock of Charlotte; 4 grandchildren, Brian Brock of Charlotte, Matthew Brock (Lauren) of Mooresville, Kristy Ratliff Davis and Ashley Ratliff both of Wadesboro; 5 great-grandchildren, Jase Ratliff, Liam Davis, Sadie Brock, Maevyn Hill and Hayes Brock. In addition to his parents, Fred Ross was preceded in death by his wife Clara Howell Marsh; a daughter, Mary Charles Ratliff; and a son-in-law, Tony Brock. The family suggests memorials be made to First United Methodist Church, 118 E. Morgan Street, Wadesboro, NC 28170
To order memorial trees or send flowers to the family in memory of Fred Ross Marsh, please visit our flower store.