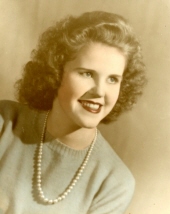 Mrs. Gladys Hope Curlee Caudle, 88, formerly of Peachland and currently of Charlotte, died Friday, March 30, 2018 at Sharon Towers in Charlotte, NC. Funeral services will be 11:00AM Saturday, April 7, 2018, at Peachland Baptist Church with Rev. Phillip Parrish officiating. The family will greet friends prior to the service in the fellowship hall beginning at 10:00AM. Interment will follow in Peachland Cemetery. Born October 2, 1929, in Polkton, NC, Gladys was a daughter of the late Edd and Corrie Hill Curlee. She graduated from Polkton High School and fondly remembered playing on the basketball team there. She married William Boyce (Bill) Caudle in 1947 and was a devoted wife to Bill until his death after 62 years of marriage. She was a beautician for many years, but retired as the first female manager of a full-service branch of United Carolina Bank. She was a loving mother and grandmother. Survivors include her son, Mike and his wife Suzette of Charlotte; two granddaughters, Bailey and Caroline; her sister, Louise Litaker, of Charlotte; and a sister-in-law, Betty Nance, of Peachland. She was preceded in death by a sister, Rachel Faulkner, and an infant son, William Richard Caudle. Memorials may be made to Peachland Baptist Church, P O Box 146, Peachland, NC 28133.
To order memorial trees or send flowers to the family in memory of Gladys Hope Curlee Caudle, please visit our flower store.
Send a Sympathy Card