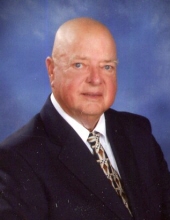 WADESBORO – On Wednesday, January 7, 2021, Mr. H. Bryant Braswell, Jr., peacefully passed away at Anson Health and Rehab in Wadesboro. There will be a memorial service at 11:00am Saturday, March 6, 2021 in the Chapel of Leavitt Funeral Home. Inurnment will follow in Anson Memorial Park. Bryant was born July 11, 1938 in Anson County, NC and was a son of the late Hiram Bryant Braswell and the late Lily Dennis Braswell. He was a graduate of Morven High School and a graduate of the University of Florida with certification in forestry. He was a life-long member of Bethel United Methodist Church and was active in the church ministries, as well as, serving on the Bethel Cemetery Committee. Bryant had a successful career with Pee Dee Electric with 35 years of service, retiring on his 62nd birthday. Left to cherish memory are his wife, Freida Gulledge Braswell; his sister and brother, Mary Braswell Mooney and husband, Charles of Raleigh, and William “Bill” Braswell of Salisbury; his nieces and nephews and their families and neighbors who are much like family, Diane and Dan Flowers and Janine and David Rywak of Wadesboro. In addition to his parents, he was preceded in death by his daughter, Natalie Renee Braswell, his sister, Betty Ann Bryan Still, his sister-in-law, Linda Slawter Braswell and his aunt, Aunt Mildred Braswell. Bryant’s family is very grateful to the staff of Anson Health and Rehab and Anson Community Hospice for the loving way they cared for him. In lieu of flowers, memorials may be made to Anson Community Hospice a division of Richmond County Hospice, 1119 N US 1, Rockingham, NC 28379 or to Bethel Cemetery Fund, c/o Marjorie Leonard, 303 Freeman Ave., Wadesboro, NC 28170. The arrangements are in care of Leavitt Funeral Home and online condolences may be made at www.leavittfh.com
To order memorial trees or send flowers to the family in memory of H Bryant Braswell, Jr., please visit our flower store.