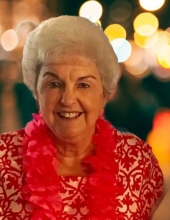 Wadesboro - On Tuesday, Augsust 4, 2020, Mrs. Helen Carpenter Streater, 80, received her healing and glorified body as she went to be with her Lord. Funeral services will be 4:00pm Thursday, August 6, 2020 in the Chapel of Leavitt Funeral Home with Rev. Barry Gerald officiating. Interment will follow in Morven Cemetery. Helen's family welcomes friends and family at anytime at the home as there will be no formal visitation. Helen was born May 19, 1940 in Anson County, NC and was a daughter of the late Albert Pinkston Carpenter and the late Betty Lee Bailey Carpenter. She worked for more than 30 years with Hornwood in Research and Development and was a member of Calvary Baptist Church. Those left to cherish her memories are her children, Sherry (Jeff) Poplin of Wadesboro, Terry (Irene) Streater of Monroe, Cindy (Tracy) Caudle and Rosemary (John) Greene all of Wadesboro; her grandchildren, Jennifer (Robert) Stovall and Beth (Rodney) Diggs both of Wadesboro, Stephanie (Jody) Brown of Polkton, Elizabeth Poplin of Helena,MT, Matthew (Bridget) Poplin of Polkton, Matthew (Kellie) Streater of Indian Trail, Quentin (Sydney Parks) Streater of Unionville, April (Kevin) Mullis, Kyle (Keely Terry) Caudle, Tyler (Alexis) Greene and Erin (Will) Ratliff all of Wadesboro; her great-grandchildren, Katelyn Stovall (fiance' Lucas Stegall), Brooke Stovall, Reagan Diggs, Carlee Brown, Lila Brown, Willow Poplin, Wren Poplin and Raelynn Mullis; her sisters and brothers, Ruth Turner, Peggy Martin, Jean Thompson, Robert Carpenter and Ralph Carpenter all of Wadesboro ; her sister-in-law, Anner Lean Wilkes of Wadesboro and her nieces and nephews and their families. In addition to her parents, she was preceded in death by her husband, Ernest Streater and her sister, Gay Harney. In lieu of flowers, memorials may be made to Calvary Baptist Church, 430 Lansford Dr, Wadesboro, NC 28170 or to the Joe Martin ALS Foundation, 100 N. Tryon Street, Suite 3420 Charlotte, NC 28202. The arrangements are in care of Leavitt Funeral Home. Online condolences may be made at www.leavittfh.com
To order memorial trees or send flowers to the family in memory of Helen Carpenter Streater, please visit our flower store.

Social distancing and COVID 19 precautions will be in place.