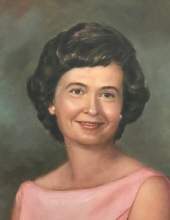 WADESBORO Mrs. Ivah Lee Broome Bennett, 87, died peacefully Friday, May 24, 2019 at Atrium Health Anson in Wadesboro. Funeral services will be 11:00am Monday, May 27, 2019 at First Baptist Church, Wadesboro with Rev. Dr. Maner Tyson officiating. Interment will follow in Anson Memorial Park. The family will greet friends from 4:00pm until 6:00pm Sunday, May 26, 2019 at Leavitt Funeral Home and other times at the home of her son and daughter-in-law. Ivah Lee was born June 16, 1931 in Union County, NC, one of nine children born to the late Edward Columbus Broome and the late Annie Gladys Baucom Broome. She was a 1949 graduate of Marshville High School. As a young lady, she worked at B.C. Moores Department Store and it was there she met a young man by the name of Carl Bennett and their courtship led to a marriage that spanned 63 years. Prior to declining health, Ivah Lee was a very active member of First Baptist Church, Wadesboro, where she was a member of the Edna Pearl Sunday School Class, sang in the Chancel Choir and served the choir as treasurer. She was also a member of Ola Kala Garden Club in Wadesboro. For all her accomplishments, the overwhelming passions in her life were always that of being a caregiver for both her son and granddaughters, all of whom she adored, as well as other family members; an accomplished and loving homemaker; and an all-around true Southern Lady. Surviving are her husband, Carl; her son and daughter-in-law, Mark and Deneal Bennett of Wadesboro; her granddaughters, Maria Bennett and Emily Bennett both of Wadesboro; her sisters-and brothers-in-law, Bobbie and Ray Stegall of Marshville and Carolyn and Robert Gaddy of Oakboro; her sisters-in-law, Lucille Broome of Monroe and Joanne Parker of Marshville; and her nieces and nephews whom she dearly loved along with their families. In addition to her parents, she was preceded in death by her brothers and sisters, Ben, Coy and Max Broome, Ruby Griffin and Earline Swink. In lieu of flowers, memorials may be made to, First Baptist Church, Chancel Choir, P.O. Box 423, Wadesboro, NC 28170. The arrangements are in care of Leavitt Funeral Home. Online condolences may be made at www.leavittfh.com
To order memorial trees or send flowers to the family in memory of Ivah Lee Broome Bennett, please visit our flower store.