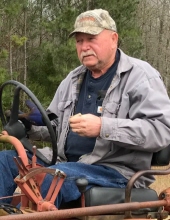 ANSONVILLE – On Thursday, March 11, 2021, Mr. James Nathaniel “Nat” Black, 72, passed away with this family with him. Services will be 11:00am Monday, March 15, 2021 by the graveside at Red Hill Baptist Church Cemetery with Rev. Rodney Clements officiating. There will be an informal visitation on Sunday, March 14, 2021 from 4:00pm until 6:00pm at Leavitt Funeral Home. The family respectfully requests all attending to wear a face mask, practice social distancing and refrain from physical contact. Nat was born September 10, 1948 in Anson County, NC and was a son of the late Nelson Black and Mary Frances Aycock Black. He was a 1966 graduate of Anson High School and was a veteran of the United States Army, having served during the Vietnam War. He owned and operated Nat Black Logging for 43 years. Nat’s company will continue to operate under the leadership of highly valued long-time employees and dedicated family members. Nat would want nothing less, and we will honor him with this. He enjoyed spending time in his shop, hosting cook outs there at the shop for his family and friends. To him, the best time was family time. He was a long time committed supporter of youth athletic teams of the county and sponsored many teams through the years. Nat loved being outdoors. Logging, reading, riding his tractor, vegetable gardening, watching Westerns on television and being a self-proclaimed book critic were among his hobbies. Those left to cherish his memory are his wife, Carol Benton Black; his daughters and sons-in-law, Stephanie and Paul Maner and Natalie and Bryan Threadgill both of Ansonville; his grandchildren, all of whom he loved and was most proud of, Grant Maner, Garrett Maner, Blair Threadgill and Blake Threadgill all of Ansonville; his sisters and brother, Judi Kimrey of Norwood, Susan Keever and Robin Shaver and husband, Donald all of Albemarle and David Black of Ansonville; his brothers-in-law, Johnny Mullinix of Troy, Herby Benton and wife, Kathryn of Ansonville and Walter Benton and wife, Shannon of Wadesboro and his nieces and nephews and their families. In addition to his parents, he was preceded in death by his brothers and sister, Bennett Black, Joe Black, Kent Black and Martha Mullinix and his father-in-law and mother-in-law, Herb and Dean Benton. Nat will be remembered as a man who was devoted to his family and his friends. He was a true family man and believed in making time for dinners and get togethers for his family. Celebrating birthdays was important to him and wanted his grandchildren with him when at all possible. For many years, he made sure his mother had a home in Ansonville and even after her passing the home is referred to as “Mama Black’s” and the family still gathers there for meals and fellowship. He simply loved his family. In lieu of flowers, memorials may be made to Red Hill Baptist Church, Youth Department, P.O. Box 207, Ansonville, NC 28007. The arrangements are in care of Leavitt Funeral Home and online condolences may be made at www.leavittfh.com
To order memorial trees or send flowers to the family in memory of James Nathaniel "Nat" Black, please visit our flower store.
Send a Sympathy Card

The family respectfully requests all attending to wear a face mask, practice social distancing and refrain from physical contact.

The family respectfully requests all attending to wear a face mask, practice social distancing and refrain from physical contact.