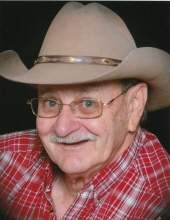 ROCKINGHAM – Mr. James Elmer Eaves, Jr., 84, passed away on Thursday, April 1, 2021 at Richmond County Hospice Haven in Rockingham. Funeral services will be 4:00pm Monday, April 5, 2021 in the Chapel of Leavitt Funeral Home in Wadesboro. Interment will follow in Northam Cemetery with Military Honors. The family will greet friends one hour prior to the service on Monday and other times at the home of his daughter on Green Lake Road in Ellerbe. James was born December 11, 1936 in Richmond County, NC a son of the late James Elmer Eaves and the late Ethel Nuttall Eaves. He was a veteran of the United States Army having served during the Korean Conflict. He had been employed with Klopman Mills, the Richmond County Water Department and later retired from Robert Snead Construction at the age of 71. Those left to cherish his memory are his daughter, Annette and Dean Caulder of Ellerbe; his son, James “Shorty” Eaves of Rockingham; his grandson, Richard Caulder (Kelby) of Rockingham; his great-grandchildren, Elizabeth, River and Grayson and his brother, Alex “Rudy” Eaves of Rockingham. In addition to his parents, he was preceded in death by his wife, Barbara Shelby Eaves, his sister, Joyce Lisk and his brothers, Shorty Eaves, Bobby Eaves and Mickey Eaves. The family is very grateful to Richmond County Hospice and Hospice Haven for the loving way they cared for James over the past few months. In lieu of flowers, memorials may be made to Richmond County Hospice, 1119 N US 1, Rockingham, NC 28379. The arrangements are in care of Leavitt Funeral Home and online condolences may be made at www.leavittfh.com
To order memorial trees or send flowers to the family in memory of James Elmer Eaves, Jr., please visit our flower store.