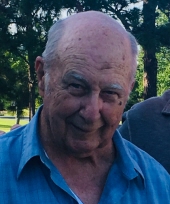 Mr. James R. Hannah, died suddenly on August 27, 2019 at the age of 86. The family will greet friends from 2:00-3:00PM on Sunday, September 1, 2019 at Leavitt Funeral Home with a funeral service afterward in the chapel at 3:00PM. Interment will follow at Anson Memorial Park. Mr. Hannah was born September 15, 1932, in Wadley, Ga., the only son of Ernest and Effie Hannah. He was raised in Morven, N.C., and later moved to Wadesboro after marrying Ruby Hurst, who was his wife for almost 64 years. Mr. Hannah was preceded in death by his wife Ruby in 2018 and his son Jerreal in 2001. He is survived by his son Roger and his wife Jan of Atlanta, grandsons John Hannah of Atlanta, Clint Hannah of New York, and Jordan Hannah of Wadesboro. After serving as a cook in the U.S. Army, he returned to Wadesboro and worked at Bowmans Restaurant. Mr. Hannah later worked as a sewing machine fixer at several local textile mills. Even after his "retirement," he returned to cooking at the Hub restaurant and continued to fix a few sewing machines at some local mills. Fixing was literally the theme for his life as he fixed numerous tools and appliances, fixed food and fixed bad moods for neighbors and friends. He loved the Lord, his family and friends, his church, cooking, gardening, and fixing things. In lieu of flowers, memorials may be made to Pleasant Grove Baptist Church, PO Box 656. Wadesboro, NC 28170; or to VFW Post 6183, PO Box 472, Norwood, NC 28128.
To order memorial trees or send flowers to the family in memory of James R. Hannah, please visit our flower store.