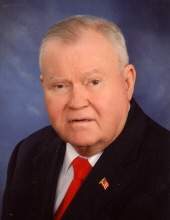 Chief Master Sergeant (Retired) James Harold Martin, age 84, died Monday, February 22, 2021, while a resident at the Yadkin Nursing Center in Yadkinville, NC. A service to celebrate James’ life will be held at 1:00PM Friday at Leavitt Funeral Home in Wadesboro with military honors. Interment will follow in Anson Memorial Park. Due to Covid-19 restrictions, the family does not plan to hold a public visitation. The public is invited to attend the funeral service and encouraged to wear masks while practicing social distancing as you are able. Also, James will lie in state at the funeral home on Thursday from 9:00AM until 6:00PM for those wishing to come by and pay their respects. Born in Tabor City, NC, on February 27, 1936, James was a son of the late Grover Cleveland and Eva Smith Martin. He joined the United States Air Force soon after his graduation from high school and spent 30 years proudly serving his country at various bases around the world. Upon his retirement, he settled in the Fayetteville area where he and his wife remained until recently when his health began to fail. Survivors include his wife of 63 years, Betty Poplin Martin of the home; two daughters, Linda M. Martin (Tim) of Yadkinville and Gloria McGowan of Loxahatchee, FL; four grandchildren, David Martin (Melissa), Daniel Martin, Ashley McGowan, and Courtney McGowan; and one brother, Ray Martin (Joan) of Petersburg, VA. In addition to his parents, James was preceded in death by a brother, Joe Martin; and three sisters, Eloise M. Malinowski, Frances M. Iler, and Doris M. Hutto.
To order memorial trees or send flowers to the family in memory of James Harold Martin, please visit our flower store.