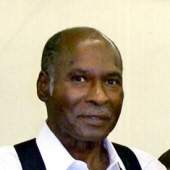 WADESBORO - On Wednesday, November 7, 2018, God in his infinite wisdom called our beloved husband, father, grandfather, brother and friend, James Edward "Man" Leamon from his earthly toil and labor to eternal rest and reward. We know, our Lord and Savior does all things well. James was born February 1, 1942 in Greenville County, SC and was a son of the late Nelson Leamon and the late Helen Wright Leamon. He was a veteran of the United States Army and was the owner and operator of J. and E. Transport for more than 20 years. He retired in 2005. Surviving are his wife, Ethel Lee Cash Leamon of the home; his children, Curtis Shaw (Pam) of Mauldin, SC, Linda Hallums(Harold) of Murfreesboro, TN, Jamie Leamon of Bennettsville, SC and James Leamon (Keauntia) of Cheraw, SC; 12 grandchildren; 10 great-grandchildren; his sister, Barbara Hendricks (Lem) of Greenville, SC; his uncle, Gary Wright of Greenville, SC; 4 sisters-in-law; 5 brothers-in-law and a host of nieces, nephews, other relatives and friends. Funeral services will be 3:00pm Friday, November 9, 2018 in the Chapel of Leavitt Funeral Home. Interment will be in Anson Memorial Park.
To order memorial trees or send flowers to the family in memory of James Edward Leamon, please visit our flower store.