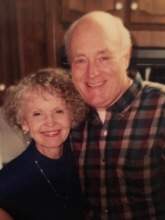 WADESBORO Mr. James Floyd "Jim" Turner, Jr., 85, died Saturday, October 27, 2018 at St. Vincent's Hospital in Birmingham, AL. He was a native of Anson County, formerly resided in Tampa, FL, Raleigh, NC, and Pinehurst, NC, and was a resident of Vestavia Hills, AL at the time of his death. Funeral services will be 12 Noon Saturday, November 3, 2018 in the Chapel of Leavitt Funeral Home. Interment will follow in Anson Memorial Park. The family will greet friends one hour prior to the service Saturday at the funeral home. He was born November 8, 1932 in Anson County, NC a son of the late James Floyd Turner, Sr. and the late Laura Mae Gray Turner. He graduated from Wadesboro High School and in 1952 enlisted in the United States Air Force. He was a recipient of the National Defense Service Medal, Army Occupation Medal (Germany), and Good Conduct Medal, and was honorably discharged in July 1956 as a Staff Sergeant. In 1961, he graduated from North Carolina State University with a Bachelor of Science in Applied Mathematics. He worked for 36 years with the United States Geological Survey, and retired as the North Carolina District Chief and Supervisory Hydrologist in February of 1996. He was awarded a Citation for Meritorious Service for his outstanding contributions to the Survey in the field of surface-water hydrology and modeling, program, and employee development by the Washington Secretary of the Interior. He was also cited for being an advocate for the advancement of women and minorities, and was noted for recruiting and providing technical support for African-American colleges and universities in North Carolina. He was the Founder and Past President of North Carolina Water Resources Association and Advisory Board member, a member of the North Carolina Water Resources Institute, and a member of the Albemarle-Pamlico Estuarine Study Technical Committee. Mr. Turner was appointed to the North Carolina Geographic Information Committee Council by Governor James B. Hunt in 1993 and served until his retirement. He authored or was a contributing author of numerous scientific manuscripts and studies. His core competencies included Soil and Water Hydrologic Analysis, Soil and Water Flow Data and Evaportranspiration. In addition to his parents, he was preceded in death by his wife, Peggy Burns Turner; his brother and sisters, Richard Turner, Lois Harris and Rachel Clanton. Surviving are his sons, James Floyd Turner, III and wife, Lee of Vestavia Hills, AL and Kenneth C. Turner and wife, Leigh Anne of Wyoming, OH; his grandsons, Jack Turner and wife, Hadley, Cal Turner, Pete Turner, Harrison Turner, Coleman Turner, Chapman Turner, and Luke Turner; his sisters-in-law, Becky Burr and husband, Ben of Wadesboro and Barbara Downer of Lilesville. He is also survived by his nieces and nephews and their families. In lieu of flowers, memorials may be made to the Scleroderma Research Foundation, 220 Montgomery St., Suite 484 San Francisco, CA 94104 (srfcure.org) or Step Up, 510 South Hewitt St. #111, Los Angeles, CA 90013 (SUWN.org). The arrangements are in care of Leavitt Funeral Home. Online condolences may be made at www.leavittfh.com
To order memorial trees or send flowers to the family in memory of James Floyd Jim Turner, Jr., please visit our flower store.