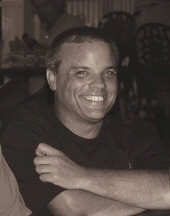 WADESBORO On Friday, September 21, 2018, James "Jamey" Gaston Ratliffe, III, 46, peacefully found eternal rest with his devoted family gathered around him. Funeral services will be 5:00pm Tuesday, September 25, 2018 in the Chapel of Leavitt Funeral Home with Rev. Ronnie Hargett officiating, who was one of his hunting friends. A private interment will follow in Anson Memorial Park. The family will greet friends from 4:00pm until 5:00pm at the funeral home on Tuesday and other times at the home of his grandmother, Mary Shepherd Trexler in Wadesboro. Jamey was born October 13, 1971 in Stanly County, NC the only son of James Gaston Ratliffe, Jr. and Dianne Trexler Deese. He was a 1990 graduate of Anson High School and worked briefly for the Employment Security Commission in Wadesboro. He was a member of First Presbyterian Church, Wadesboro. He was an avid hunter and fisherman. He was a UNC Tarheels and Dallas Cowboys fan and enjoyed NASCAR; being a fan of Dale Earnhardt, Sr. and Kale Yarborough. Jamey is survived by his father, Jimmy Ratliffe of Wadesboro; his mother and step-father, Dianne and Danny Deese of Wadesboro; his sisters and brothers-in-law, Tracey and Tippy Leary of Peachland and Holly and Greg Stewart of Claremont; his nieces, Lauren (Josh) Casher of Charlotte, Brittany (Eric Johnson) Leary and Lacey Leary both of Peachland; his maternal grandmother, Mary Shepherd Gaddy Trexler of Wadesboro and his beloved Chihuahua, Paco. Also surviving are his aunts and uncles, LuAnn and Billy Short, Rodney and Barbara Ratliffe, David and Peggy Trexler, Glenn and Vera Trexler and Dwight and Jeanne Trexler all of Wadesboro, Lynn and Tim Barbee of Morven, Carol and Peter Krough of Siasconset, MA and Gloria Long of Rockingham; his cousins and their families and his best friend, who was much like a brother, Toby Carpenter of Wadesboro. He was preceded in death by his paternal grandparents, James and Margretta Hildreth Ratliffe and his maternal grandfather, George Robert Trexler. Jameys family is most grateful to his in home caregiver, Rosa Clark; the staff of Anson Health and Rehabilitation Center and Community Home Care and Hospice for the loving manner in which they cared for him. In lieu of flowers, memorials may be made to First Presbyterian Church, P.O. Box 351, Wadesboro, NC 28170 or to Community Home Care and Hospice, 1119 US HWY 1, Rockingham, NC 28379. The arrangements are in care of Leavitt Funeral Home. Online condolences may be made at www.leavittfh.com
To order memorial trees or send flowers to the family in memory of Jamey Ratliffe, please visit our flower store.
Send a Sympathy Card